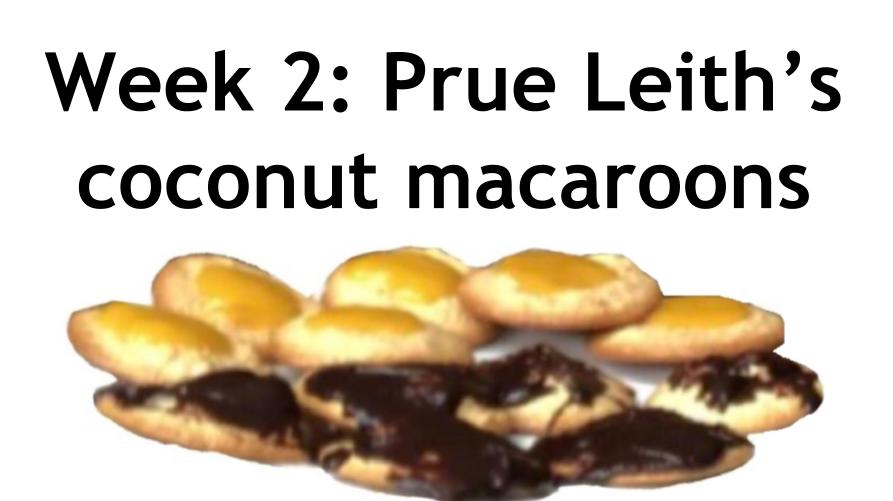 This is a new update on my mission of baking my way through the technical challenges of “The Great British Baking Show.” I bake for biscuit this week.

Leith’s Recipe includes methods for making the macaroons and the mango curd to sit inside half of them. The recipe also gives instruction for decoration.

Like the first challenge I attempted, the start of the bake was hard because I had to figure out the measurements.

My first step, after spending time on measurement conversions, was making a mango curd. As I said prior, I basically had no baking experience, so I didn’t know what a curd was. It turns out it is just a mixture of mango puree, sugar, an egg, egg whites, and juice from a lime.

After the mixture was combined, it was heated over simmering water. From there, it was taken off of the heat, where the butter was incorporated. Then it was left to set.

Making the macaroon base was quite complicated because if I were to do one thing incorrectly the whole bake would fail. After preparing a baking sheet for the macaroons and heating the oven, I put coconut in the food processor.

After the flakes are the perfect size, the condensed milk, almond extract, and rice flour are added straight into the coconut. Then, whipped egg whites are added to that mixture, which is then transferred to two different piping bags.

The mixture is piped into circles onto the baking paper. Half of the circles were piped and filled with a chocolate square, while the other half were piped with a space for the mango curd to be added after the bake.

Then the macaroons were baked in an oven, heated to 300°F, for around 25 minutes. The cooking time will be different for everyone, but my macaroons were a little overdone after this amount of time.

After the macaroons are out of the oven, they should be decorated with either chocolate or the mango curd. The chocolate should be melted and piped or drizzled over the six macaroons that are filled with chocolate. The remaining six have a space, which is where a spoonful of the mango curd should be place.

I did complete the challenge in the time limit, but because of the rush against the clock, I made a few rookie errors. If I’m being completely honest, my coconut macaroons were horrible. They didn’t taste great and they looked unprofessional and messy. But, the outcome does reflect the mistakes that I made.

My first mistake was the mango curd, which I messed up because I left it over the heat for too long. I ended up scrapping it and made another mistake- I pieced together something for the filling that wasn’t even a curd.

I also found out that I had pulsed the coconut for too long in my food processor, because the coconut was too small and it totally threw off the texture and baking time. And what else could I possibly have done wrong? I over-whipped the egg whites and improvised with flour to make the texture more normal, which didn’t actually work.

By the time I had gotten to decorate I had nearly given up. Instead of the nice drizzled look that the macaroons were supposed to have, I just slapped the melted chocolate onto the macaroons. The makeshift curd was actually running off the sides of the mango macaroons.

It’s pretty safe to say that I would’ve come last in this week’s technical challenge.

Check out other stories on eSomethin: