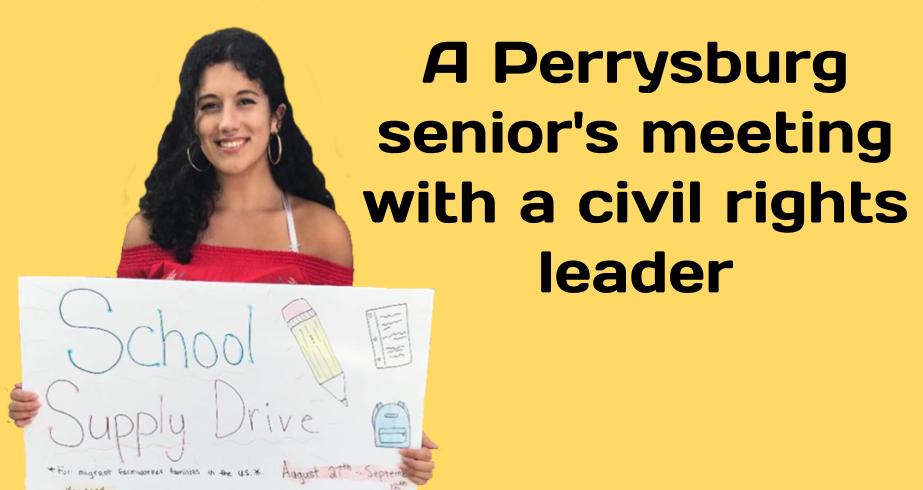 Families moving from farm to farm, state to state, putting food onto our table while barely putting any on theirs. This is the life faced by more than three million migrant workers according to the NCFH (National Center for Farmworker Health, Inc.).

While their struggle has gone unnoticed by a majority of the students of Perrysburg, one senior, Abigail Connell decided to do something to help.

“I got this idea because I was actually on Instagram,” she laughed “It’s actually a little embarrassing but I got to reading things on Instagram, about how Covid-19 has impacted different kinds of communities,” said Connell.

The website of the Migrant Clinicians Network defines migrant workers as “as an individual who is required to be absent from a permanent place of residence for the purpose of seeking remunerated employment in agricultural work”.

The Instagram posts that spurred Connell to action were made by an account called “flowerinspanish”. The account description reads “Revolutionist. Blessed. Let’s take strategically calculated risks based off our intuition and make magic happen,” with the hashtags “abolish ice” (Immigrations and Customs Enforcement) and “immigrationreformnow”.

Connell said, “My family is from Mexico […] and that’s where a majority of the migrant workers are from, are from Latin American countries. And so reading this article about how it impacted migrant families and I was like ‘Okay, this is crazy — like, how is it that when migrant parents are asked what supplies they needed they are asking for stuff for their kids and not themselves.”

Connell was not one to sit aside when she knew about the hardship of these families.

Connell found her answer in creating a donation box at Perrysburg High school that would help give the children of migrant workers the school supplies and items that they desperately need.

“It was like 11 o’clock at night, and I was like ‘maybe I could buy a few supplies and donate it. […] I started googling things and found there is actually a migrant education center in Fremont. […] So I sent [the center] an email saying ‘Hey, if I could get you some supplies would you take a donation?’” Connell continued.

Connell described how she ran downstairs that night to explain to her mother her idea. With her plan formulated, she had to find those in the school who could help her put this together. She went to an English teacher, Mrs. Amy Farrar.

Connell described her thought process: “She’s somebody who’s always been so supportive. If I emailed her, she’s gonna help me out.”

When asked how she felt when Connell asked her, Farrar said:“I was shocked and so pleasantly shocked that some seniors would take time out of their day to do this for other people.”  Farrar had previous knowledge of the hardships that migrant workers face, having had a special needs student whose parents were migrant workers.

Connell then got into touch with Student Council advisor Mr. Kevin English to help sponsor the event. Connell explained that “He helped me make it more publicized.” She had also set up boxes at her nephew’s school, Saint Rose.

The box went beyond Connell’s expectations. She recalls being nervous due to the situation surrounding COVID-19 and the hybrid schedule.

“We ended up getting almost 20 bookbags in total,” and all were filled with much-needed supplies and necessities for these workers and their children. “We got calculators, lunch boxes, a lot of books for reading and coloring […] literally everything. […] It was crazy how generous people were,” Connell explained.

She said that “We had ended up getting so many donations that the guy who came to pick up the donations, he had brought two cars, had to come back the next week to get the rest because there was literally so much […] I was in shock!”.

The donation box helped open an unexpected door for Connell, one leading to the Hispanic civil rights activist Baldemar Velasquez. Velasquez had grown up in a migrant worker family, recalling in an article with Food Tank how his “…family being cheated out of wages and suffer verbal abuses from field men, labor contractors, growers, and racist townspeople in the rural towns.”

Velasquez’s family eventually settled in Gilboa, Ohio,` and went to college at Bluffton. At Bluffton, he joined the CORE (Congress of Racial Equality), and then later would go on to found FLOC (Farm Labor Organizing Committee) with his father.

The original goal of FLOC was to improve housing, wages, and education for the workers, where they achieved mild success. This success was halted when American Farm Bureau Federation convinced farm owners to refuse to honor their contracts.

The FLOC turned their efforts to take on big companies, one being the Cambell’s soup company. They won, leading to the first three-way contract between the industry, grower associates, and workers.

Velasquez also worked with the great Martin Luther King Jr. in 1968 to plan the “Poor People’s Campaign”, a march that sought to unify the nations poor and discriminated peoples. This campaign still continues to this day, with events and protests being planned continuously on their website: https://www.poorpeoplescampaign.org.

Connell was interviewed by the Perrysburg Messenger, where an editor got her into contact with Velasquez whom they were also interviewing. They gave Velasquez her email, and she was later invited to actually meet with the famed civil rights activist.

She described Velasquez, saying “I don’t mean this in a bad way but he was so old that he knew so much. I wanna say he was 73 and he had met with Martin Luther King, Caesar Chavez […] and he knew Obama […] It was like talking to an artifact.” Throughout this part of the interview, Connell seemed to be extremely shocked and in awe remembering meeting the man.

She continued “One of the things he told me was ‘you know people are always going to be critical of somethings you do but you know you still have to do them.’”

Connell described how active the activist was, saying that he runs three and a half miles a day and plays the guitar (which he can be seen holding in some photos when google searching his name).

The experience seemed to deeply resonate with Connell, she explained “ The way he described what he does was really inspiring to me. Like I always knew I wanted to be a [Spanish] teacher […] this is kinda what told me ‘this is it’.”

Connell expects to do more and help those who are underprivileged and clearly took her time with Velasquez to heart. She credits her family, friends, Farrar, and English for helping the donation box become the success that it was.

Check out more on eSomethin: