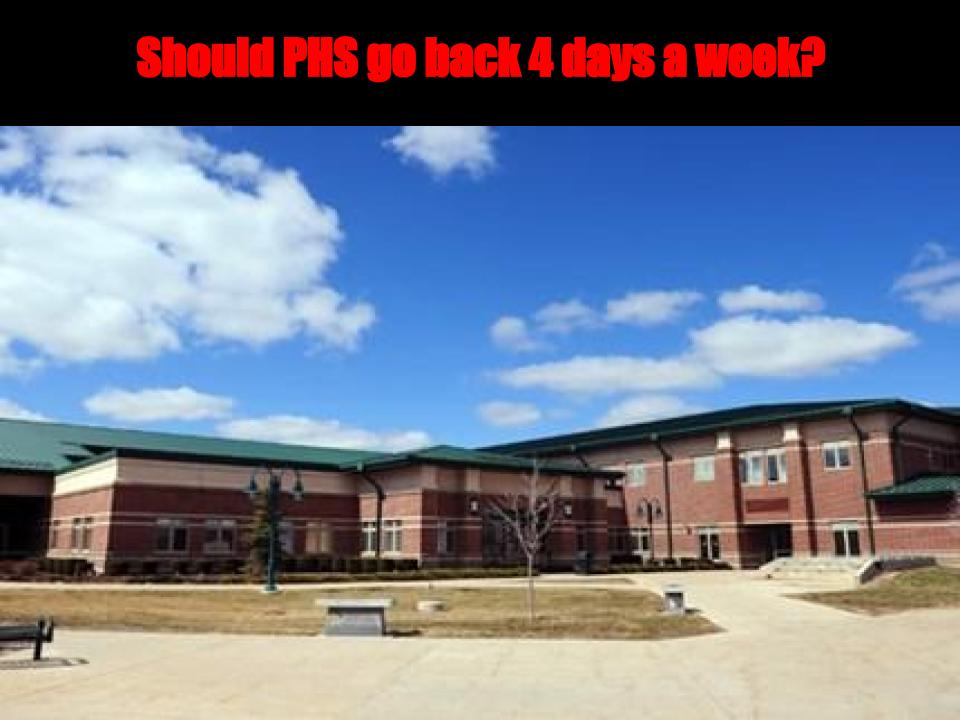 As we near the mid-term of 2nd quarter, many people seem to have been asking the same question: will Perrysburg High School be returning to school four days a week in January?

“It’s (PHS) the fourth largest city in Wood county, and we’re going put all of the residents of that city in a two-story building and every 50 minutes we’re gonna ask them to move. That’s a challenge,” Hosler said

The proposed return plan is outlined as follows:

Based on this timeline, PHS would potentially go back four days a week starting on January 19th.

There are many factors at play that will determine whether or not the high school has a chance of going back full capacity on the 19th of January. The board will rely in part on the advice of the Wood County Health Department.

Now you might be asking yourself, why January 19th? Why not the first day of second semester? To answer that question we have to look at the statistics from 1st quarter.

The first week of school there were very low numbers in all categories. But then after the second week, the number of students at the high school quarantined spiked. The district wants to make sure that this trend does not happen again in second semester.

To help answer that question, look at some other schools in Ohio that have been back 4-5 days a week and their student sizes are more proportionate to ours.

This data does show that more students in school at the same time likely increases the number of positive cases and quarantines. There are no in-school exposures to COVID-19 in Mason City Schools, just like here in Perrysburg so far. Mason City Schools’ high school also has around 3,000 kids in it currently, and Perrysburg High School has around half of that with about 1,500 students.

Here is just 1 week of data from Westchester Lakota Schools from early October:

Westchester Lakota Schools has over 17,000 high school students and is divided over multiple high schools. In just this one week of data, there were 200 quarantines with all the high schools in the district combined. The importance of this school district’s data is that it shows that if we were to return to school four days a week, when quarantines occur, they may occur in much larger spikes, and maybe more frequently.

These other schools’ data shows that if Perrysburg students were to go back four days a week, the number of positive cases and quarantines would likely go up.

Ohio governor Mike DeWine has warned that if the number of positive cases do not slow down soon, shutdowns may occur starting with fitness centers, bars, and restaurants.