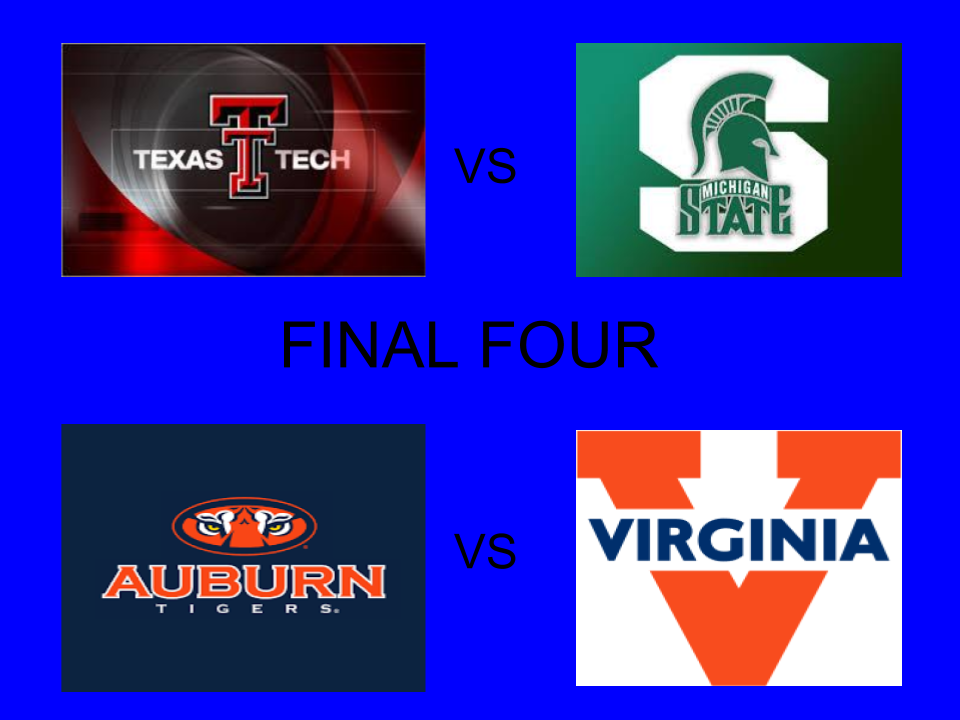 As the first 4 rounds of the tournament are over, teams approach the Final Four in the NCAA Men’s Basketball tournament. Brackets are busted, others are somewhat good, and a small group of brackets are still going strong with a couple mistakes. One of the matchups in the Final Four game is (3)Texas Tech Red Raiders and the (2)Michigan State Spartans. The other matchup will be the (5)Auburn Tigers and (1)Virginia Cavaliers. The matchups will be good ones: Texas Tech and Auburn both have a really good offenses while Virginia and Michigan State both have really strong defenses which means low scoring games are in store.

Hello, Guys. We have a match up between Texas Tech and the Michigan State Spartans inside the first Final Four game. Inside the other region, we have the Auburn Tigers versus the Virginia Cavaliers.

So, how Texas Tech got there: they defeated a good Michigan team — and [Texas Tech] only held [Michigan] to 44 points — and the beat a pretty good veteran Gonzaga team to 69 points, which they have scored above 75 points per game inside the tournament, and then they are facing a Michigan State team that just came off of there win against Zion Williamson and the Duke Blue Devils — and the Duke Blue Devils have one of the best three point percentages in the league, so I think Texas Tech will come up on top because they haven’t given up too many points inside the tournament. Also, their defense has been really really solid and keeping their opponents under 70 points per game.

Inside the other region, we have Auburn vs the Virginia Cavaliers and Virginia has had a little bit of an easier ride to the Final Four than the Auburn has because Virginia has defeated Kansas, Kentucky, and North Carolina on the road to the Final Four, and the last team to defeat all three of those teams was the Arizona Wildcats in 1997 and [Arizona] won the national championship, so that trend is like how it’s going to happen this year: the Auburn Tigers will defeat Virginia Cavaliers because they have more better of free throw percentage, better three-point percentage because they have been shooting threes all over the court against their opponents, averaging 8 three-pointers per game, and Virginia has had an easier side — they have not had tougher opponents than the Auburn Tigers… Auburn Tigers are the 5th seed so they had to beat 4th seed, a number 1 seed, and number 2 seed into the Final Four.

So it’s going to be a Auburn vs Texas Tech matchup [for the championship] and I believe it’s going to be the Auburn Tigers [who] are going to come out on top, even though Texas Tech has had a really good defense inside their games. And, offensive battle versus a defensive battle, I think the offensive battle will overcome. The Texas Tech defense struggles. They could have potentially have leading up to the final game, so I think the Auburn Tigers will come out shooting threes like they have been and going on their runs about how they going throughout the tournament making their threes and scoring a bunch of points.