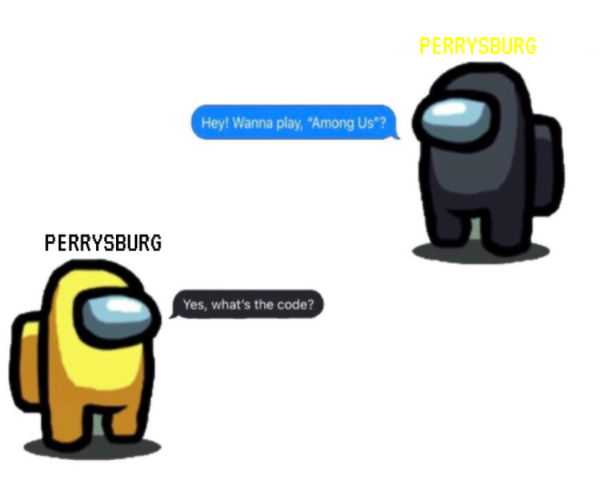 Have you jumped into a spaceship full of your peers? Well now you can with the popular game “Among Us” that has an erie, comical twist.

“Among Us” is a space-themed mystery game that was released in 2018 by InnerSloth. Even though the game was originally published years ago, it became especially popular during 2020 because teens discovered it amidst the global pandemic.

Many students at Perrysburg High School play the game, like Abigail Donaldson and Kiana Allan who love to play the game.

Both Donaldson and Allan began playing “Among Us” a few weeks ago. Donaldson plays it almost everyday, while Allan says she only plays a few times every week.

Donaldson said she likes to play because the game is “really fun to play with friends and it’s a good way to socialize during quarantine.”

Allan added, “To play while you’re in a discord chat.” Discord lets players talk with the other players in your game.

When you enter the Among Us, you can choose to host your own game, join a random game, or to use a join-code to play with friends. After this, you’ll join a lobby with ten other players.

In the lobby, you can change your skin color and pick a hat. The game offers twelve colors and tons of hats to choose from. You can choose to have a block of cheese atop your head, or a snowman- the options are nearly endless. Allan mentioned that she loves the customizable astronauts.

The ten players are teleported out of the spaceship lobby and are given either an “imposter” or “crewmate” position. Once the players are given a position, the game has begun.

Allan shares that she prefers being a crewmate because she says she is, “The worst imposter- they always throw me out first because I’m a horrible liar.”

If you are given Allan’s favorite role, crewmate, you are a worker on the ship. Your role is to complete a series of tasks to keep the ship running, and before everyone is attacked. If not, you become one of the, “imposters” in the game. You are the opposite of a crewmate- your job is to try to attack each player, or sabotage their tasks.

Tasks can be different every round. The tasks are realistic, and they each relate to the idea of working in a real spaceship. Some of the common tasks require the crewmates to swipe a sign-in card, download data, fix wires, and direct and accept power in different areas of the spaceship.

There is an unwritten task though. You don’t want to be attacked. There isn’t any real way to do this, except run. But more often than not, you’ll be attacked by an imposter.

Donaldson says she prefers playing as an imposter. She says, “It’s fun trying to not get caught and watching everyone try to figure out who it is, and acting like you’re a crewmate. It’s also funny when you absolutely fail and get caught.”

Even though most of the players are completing their tasks, there are some players who are not. These players are the imposters- there can be up to three imposters in one game. As an imposter, you’re playing a totally different game.

When playing as an imposter, you can’t complete the usual tasks- instead your task is to kill or sabotage every crewmate. As you sprint around the spaceship, you will have opportunities to attack the other players. You can do this by tapping a button on the right of the screen.

Being imposter has its ups and downs. As an imposter you’re free of your tasks, but you also have to be extremely careful with everything you do.

This being said, when a crewmate dies, their body is left on the floor until another crewmate, or imposter reports it. A player can do this by pressing a button on the screen.

Once a body has been reported, the screen changes to a chat box. Here, the players will all question the reporter about the body. Each player starts to defend themself, and gives their alibi.

Donaldson says, referring to the chat, that, “Sometimes there can be some really mean or annoying people in the game, but when you play with friends it’s a lot better. You can joke around and have more fun by voting people out for no reason.”

Allan shares that, because she uses discord, her group doesn’t have to use the chat box very often.

The players argue for a few minutes until they think they’ve found the suspect, who will be voted off. Then the suspect is thrown into space and the players find out if they were right.

According to Donaldson, being an imposter during the voting is very stressful. This is because you have to lie, and keep up with your fake alibi throughout the entire game. Donaldson says she lies, “Every single time.”

Donaldson thinks it’s best to take it positively when you’re caught. She says, “Instead of being upset about it, I just laugh.”

Allan and Donaldson both recommend, “Among Us” to anyone who hasn’t played it yet.

Donaldson mentioned that some of her friends thought they wouldn’t like it but tried playing anyways and are now obsessed with it. “So even if you don’t think it’s your thing,” Donaldson said, “try playing it with friends. It’s more fun than you’d expect!”

Check out other stories on eSomethin!