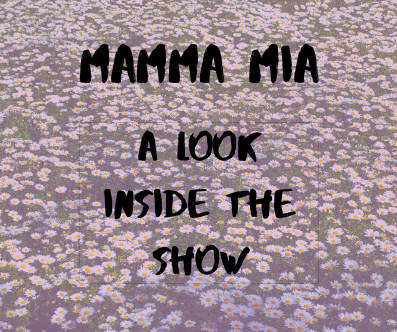 In the production, Sophie (Kylie Morgan) is ready to marry her fiancée Sky (Grant Hayward), except for one thing — she has never met her father and wants him present for the big day. She invites three men that she discovers in her mother’s diary and believes to be candidates. But when they all arrive, Sophie’s mother Donna (Grace Davis) becomes distressed.

Bellavia: I’m James Bellavia. I am a junior and I play the part of Sam.

Bernhoft: I’m Bennett Bernhoft. I play the part of Bill and I am a junior currently.

Hogle: Hi guys, my name is Andrew Hogle and I play Harry Bright in Mamma Mia!

Davis: I’m Grace Davis and I’m a senior and I play Donna Sheridan.

Paige Paprocki: People should come see Mamma Mia! because the entire cast has put in so much hard work whether it was through crew or being in the cast. So much work has been put into the show and the set looks amazing and the dancing is amazing and the acting and the singing are all amazing.