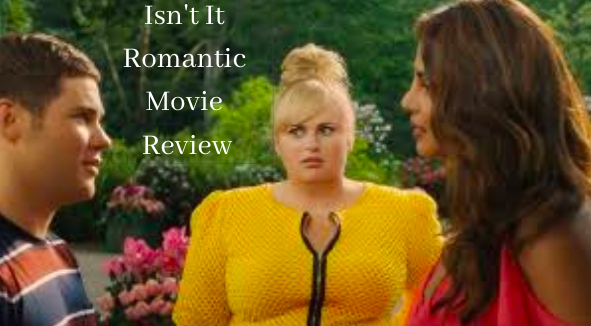 Isn’t It Romantic opened February 13, 2019 with a PG-13 rating. Rotten Tomatoes gave the production a 69% fresh review and Common Sense Media scored it ⅘. Vanity Fair’s Richard Lawson said he “wish[es] the movie was just a tad sharper, [it] took a little more time to really clarify its stance on this whole social-sexual-commercial world of romantic aspirationalism, to make its commentary and its humor really sing – and sting.”

The movie surrounds Natalie – played by Rebel Wilson – a New York architect and complete pushover. With a lack of self-esteem and view that fairy tale loves don’t exist, she is blind to all romantic opportunities.

One day, on her way home, she gets mugged and within the midst of the brawl, and bangs her head, which sends her into a parallel universe. There, love interests are in every corner. Now, in order to find her way back home, she must find the right love story meant for her – her two main love interests being Blake, the sexy client of the firm played by Liam Hemsworth and Josh, her close friend and coworker played by Adam Devine. Throughout the search, she’s met with every romantic comedy stereotype in the book in this romcom spinoff.

Going into the theatre I had really high hopes for this movie as a fan of some of its main actors, but I have to say it was a major disappointment. The movie had a very slow start, and although its purpose was to make fun of romantic comedies, the jokes often seemed to fall flat. The shining star of the whole movie was Brandon Scott Jones’ character, Donny, who plays the stereotypical gay best friend. Jones’ character managed to pull me back in when I zoned out during this flick. The couple next to us even left the movie halfway through.

Don’t get me wrong — there were a few good parts to this movie including Wilson’s karaoke scene, but it definitely wasn’t as good as it potentially could have been.