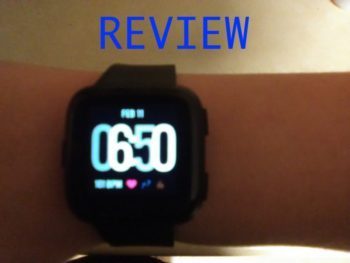 You have probably seen in in commercials and Target ads, the Fitbit Versa seems amazing, it is, but is it the best thing ever, let’s find out.

High School students would enjoy the Fitbit Versa because it helps people track their steps throughout the day. It’s great for people who like to set goals and watch themselves reach them.

One of the best features of the Versa is the silent alarm, which wakes the wearer up with a vibration rather than a sound. It is helpful because it provides a gentler wake than an audible alarm.

The Versa comes equipped with the ability, like all other fitbit models, to track the wearers heart rate, steps, and number of calories he or she burns each day, and exercise.

Another great feature is that it is entirely waterproof, which has not been seen in previous models. Swimming with the watch is now possible, a great exercise that can be tracked.

However, to set up and personalize the Versa, the Fitbit app or an account on the Fitbit website is required. This is how the step goal, which at first is 10,000, is set. Also, if connected to bluetooth on a phone, one can control music playing from his or her phone, on the screen of the Fitbit.

Despite all it’s features, the Versa is not flawless. It has a battery life slightly behind older models, and the wristband needs to be fairly tight. Steps are detected by the movement of an arm when one walks, rather than each actual step you take. This can be a slight annoyance, especially if one carry’s binders or other school supplies throughout the day.

All-in-all, if you are thinking of getting a fitness tracker or smartwatch, the Fitbit Versa is a great pick, as long as you’re willing to overlook a few minor faults.