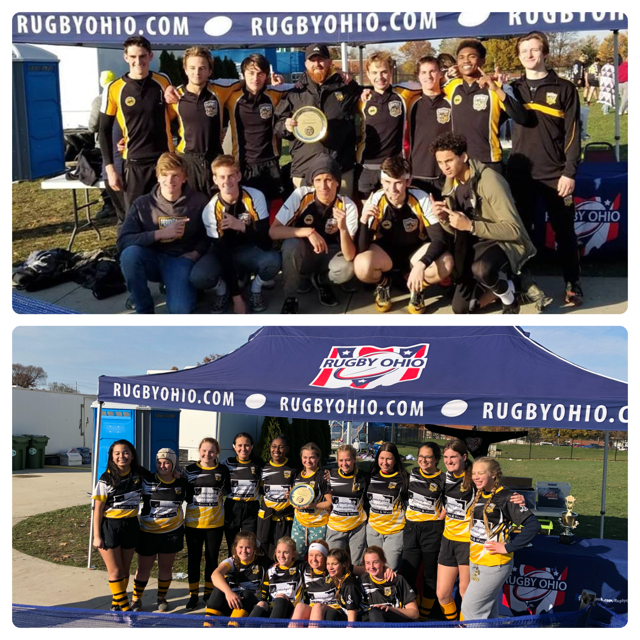 Rugby is one of the fastest growing sports in North America. Perrysburg has had a rugby club for 15 years since Coach Phil Gutkoski started it for his son, and it has grown greatly since. The Perrysburg Rugby Club regularly attracts seventy players per season.

On Sunday, November 11, the Perrysburg Rugby Club’s boys’ and girls’ teams traveled to Notre Dame College in Euclid, Ohio to compete in the States championship for their 7s season.

Perrysburg Rugby Club’s A-side girls team, along with the B-side boys team, won the championship for their division. This marks the second year in a row the girls team won the State Championship.

Senior Kristy Herhold, captain of the girls A-side team, reflects back to winning the championship game against Amherst girls: “I wanted to cry. Seeing the team move together from the beginning only makes me more excited for 15s to start and see how far we go.”

The A-side boys team received State Runner’s Up as well.

Coach Marc Goddard encouraged the girls teams through the nerves before and after the championship game: “[I felt] actually relieved, because I think the players were so emotionally invested in this championship after last year’s semi-final loss to the same team [during 15s]. [Of] their dedication and hard work in practice.”

7s season rugby matches include seven players from each team on the field, playing for two seven- minute halves, concluding the match at 14 minutes total. The teams are based off of the division they play for.

The girls A-team plays in the middle division, while B-side plays for the lower division of Ohio teams. Competition against other Ohio teams determines the winner that will advance closer to the championship game.

Perrysburg Rugby fans have more matchups to enjoy in the coming months.

15s is the season during spring, where each team has 15 players on the field for a roughly seventy minute long game total. The Perrysburg Rugby Club travels to Nashville, Tennessee,  and Elkhart, Indiana to compete in regional tournaments.

As 7s season winds down, Coach Goddard says, “I am very proud of them and very excited for them. Proud of their conduct on the field, upholding all the rugby values whilst in the heat of battle. It’s not easy to do.”

Goddard also praises the team’s leaders: “They create an environment for new players to feel comfortable, help them learn, and encourage them. The competitiveness of the team combined with the aggressive nature of the sport means it could be quite an intimidating sport to try for the first time, but the first year players seemed to slot in really well.”.

Avery Borgelt, a junior and player on the B-side boys rugby team speaks on winning the championship as a first year player: “It was a great experience- learning the game with the rest of the team. I’m looking forward to 15s and facing even harder competition and basically relearning the game.  I hope to play on A-side next year and go for another state title.” The B side boys team took home the plate above as their championship trophy.

Captain of A-side boys team senior Hudson Tafelski is focused on the future: “It’s just 7s so it’s not as important as spring season. It helps a lot with spacing and tackling. This is the second year we got second [place] in states for 7s, so it’s a little frustrating, but I’m happy to be playing with the team.” Tafelski also remarked on how 7s season prepares players and makes them better in the long run.

The sport of rugby is all about respect for the game, the sir (referee), and each other. The players work hard to play harder and to create bonds with each other as well as the coaches.

Rugby Club is looking to recruit for in time for for 15s this spring! If you are interested in playing rugby, check out the Perrysburg Rugby Club website: www.perrysburgrugby.com

Or contact Coach Marc Goddard at his email: marcgoddard@hotmail.com