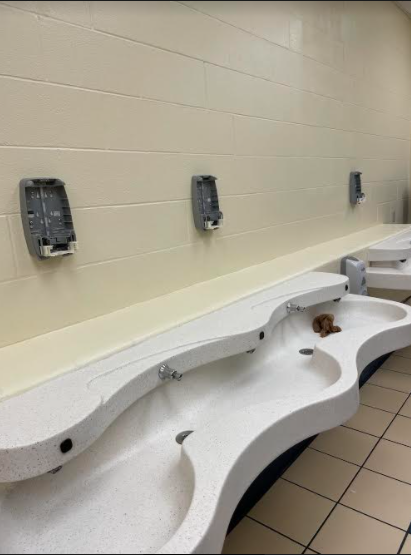 Perrysburg High School is suffering from theft and property damage due to a popular TikTok trend “Devious Licks.”

Soap dispensers in the boys bathrooms have been damaged and stolen. Paper towel and toilet paper dispensers have also gone missing. Recently the boys gym bathroom had a toilet defaced with MiO Water Enhancer, negatively affecting both school staff and students alike.

High school principal Aaron Cookson said, “There’s a lot of adjectives I could use in terms of my feelings, like disappointed, upset, angry and frustrated.”

Many other staff members feel the same way.

Cookson went on to say that he was “very disappointed in a very select few of our students’ decision-making in regards to vandalizing our restrooms.”

Cookson reported that students came up to him to complain about the inconvenience of missing equipment in the bathrooms.

“What it comes back to, in terms of the cost and repairs, is to the parents. I mean, they’re taxpayers. Those are the people who put soap dispensers on the walls, financially,” Cookson said.

Actions have consequences. Cookson said, “As an administrative team, we are working on our investigative process, and we’re trying to track down those who have made terrible decisions in destroying restrooms, and if we do catch them, we will administer the harshest punishment our student handbook will allow.”

Students can also help bring an end to these devious licks. Cookson, besides hoping this ends sooner rather than later, hopes, too, that “students will come forward, if they have information, and tell us because it will stay anonymous.”

This means that any pictures, text or video would be of great help to the police and school staff for these cases.

Law enforcement is involved as well. School police officer Greg Cole explained that “[the trend] is criminal damaging which is a misdemeanor of the 4th degree to start off with. To put that in perspective, a traffic ticket is a minor misdemeanor… If you create that much destruction that it shuts down a business — a school is a business, and they’d have to shut down the bathroom—it could be considered vandalism, and that can go all the way up to a felony level. All for a few likes on social media.”

Cole said, “It’s really interesting because you’re destroying your own property, and then you’re putting evidence of it up on TikTok.” Sharing on social media conveniently helps Cole narrow down the select few students that are to blame.

“We are currently undergoing several different investigations at the same time,” said Cole.

For these cases, the school and law enforcement are doing their own independent investigations. Cole said whomever is found guilty will face both school and criminal consequences.

Students have been frustrated with the Devious Licks trend also, not just staff.

“It’s just confusing to me why they do that. I don’t know what they get from it,” stated junior Alan Jimenez.

“It’s stupid,” said junior Corbin Toepfer. “It’s prevented me from washing my hands.” Just like Toepfer, many PHS students are being affected by the stolen soap dispensers. With Covid-19 still around, a lack of soap dispensers can be quite dangerous.

On where this trend came from, a Devious Lick is a term that originated from a TikTok post by user jugg4elias. The original video showed off a box of disposable masks that he claims he stole from a school and was captioned with, “A month into school . . . absolutely devious lick.” The term refers to the act of recording oneself stealing items from their schools, usually from bathrooms. The meaning of the word “lick” is “a successful type of theft which results in an acceptable, impressive and rewarding payday” according to the Urban Dictionary.

These Devious Licks are not unique to Perrysburg as “licks” are happening in many public schools in the United States.

In an article called, “Florida teens arrested after taking part in ‘devious lick’ TikTok challenge, sheriff says,” it is shown how this trend is also happening in other states, such as Florida, and kids are actually being arrested and criminally charged with “petty theft and criminal mischief.”

In Boone County, Kentucky, eight juveniles were criminally charged due to the same trend, as written in this article. Another article neatly summarizes the other cases not mentioned in the previous article of kids getting facing criminal charges due to being influenced by social media.

Just like other past trends, these “Devious Licks” will come to an end, sooner or later. Yet, the sooner it stops, the more money will be saved, and students will be able to go into their bathrooms without worrying about what will be stolen or damaged next.