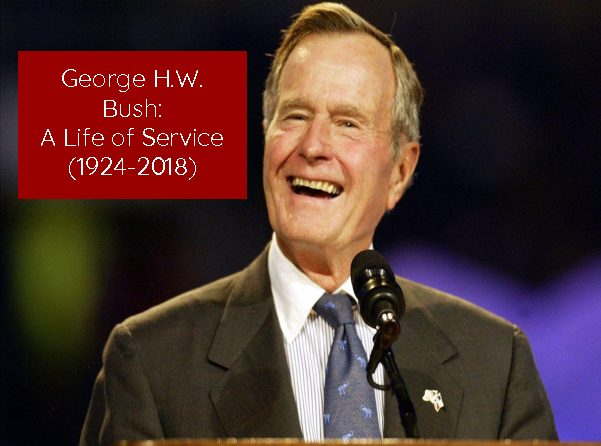 With former President George H. W. Bush passing away on November 30th, it is appropriate to take a look back on his presidency for those who aren’t aware of his importance on American history.

George H. W. Bush was born on June 12th, 1924 in Milton, Massachusetts. He is the son of Prescott Bush, an investment banker and Senator from Connecticut from 1952 to 1963.

He married Barbara Pierce in 1945. The two had six children, most notably George W. Bush, the 43rd President, and Jeb Bush, the Florida Governor. They would remain married for the next 73 years until her death in 2018. He served in the Navy during World War II. He was elected to the House of Representatives from Texas in 1966 (serving from 1967 to 1971). Bush was later appointed to several key positions, including U.S. ambassador to the United Nations in 1971 by President Nixon, head of the Republican National Committee during the Watergate scandal, U.S. envoy to China under President Ford. Eventually he was appointed to Director of the C.I.A. by Ford in 1976 where he is given credit for greatly reviving the agency.

He ran for the Republican nomination for President in 1980, but was defeated by Ronald Reagan. Reagan would tap Bush to serve as his running mate where they would wallop incumbent President Jimmy Carter. As Vice President, Bush had responsibility in several domestic areas, including Federal deregulation and anti-drug programs, and visited scores of foreign countries.

Bush would again run for President in 1988. His two most famous quotes came during this run, “read my lips: no new taxes!” and calling for a “kinder, gentler nation.” He would finally reach the Presidency himself along with Dan Quayle.

Bush faced a drastically changing world. The Cold War came to an end, the Communist empire collapsed, and the Berlin Wall finally fell. The Soviet Union ceased to exist and it’s President, Mikhail Gorbachev, whom Bush had supported, resigned.

Bush responded to the dissolve of the Soviet Union with the same skill and grace he handled every problem with, helping whenever he could (knowing we would need to work with them in the future). He oversaw the U.S. military’s removal of Panamanian dictator Manuel Noriega from power.

Shortly after, Bush responded to Iraqi President Saddam Hussein’s invasion of Kuwait (August 1990). He created a national coalition and lead a military strike to drive Hussein out of the country. Bush’s handling of the invasion in Kuwait is viewed by many to be the greatest success of his Presidency.

Bush delivered the most famous speech of his Presidency, “Now the 28 countries with forces in the Gulf area have exhausted all reasonable efforts to reach a peaceful resolution. [We] have no choice but to drive Saddam from Kuwait by force. We will not fail. We are determined to knock out Saddam Hussein’s nuclear bomb potential. We will also destroy his chemical weapons facilities. Much of Saddam’s artillery and tanks will be destroyed. … Our objectives are clear: Saddam Hussein’s forces will leave Kuwait.”

However, Bush failed to handle the economic issues at home and raised taxes (breaking his famous campaign promise) causing him to lose his reelection bid in 1992 to Bill Clinton.

President Bush is generally looked upon as an above average President who did the best he could given the situations around him. America would not be the country it is today with him.