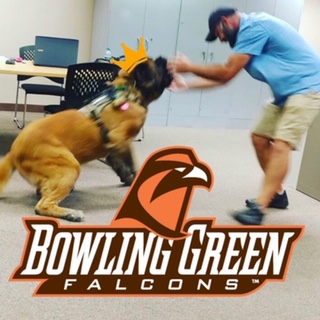 While many students may be aware of the giant dog that can be seen roaming around campus many not know that his name is Harvey and he is a service dog for army veteran and non-traditional student Daniel Camper. Camper served in the U.S. Army for 19 years, 4 months, and 12 days. He served in Fort Lewis, Camp Howze, Korea, Fort Belvoir, Fort Bragg, Kosovo, Afghanistan, Iraq, Kuwait and Qatar. He was medically discharged and retired in March of 2015. Camper was united with Harvey in 2016.

Harvey is an English Mastiff weighing in at 207 pounds. Harvey was trained as a service dog in the U.K., so he’s actually English. Harvey is very smart and is trained to help with PTSD and sensing seizures. As his dad put it, “Harvey’s giant nose” is able to sense pheromones that are given off before he has a seizure. If he senses these, he pulls Camper out of the room and tries to guide him to a soft spot. He then wedges himself between Camper head and the ground, making sure to protect him. He can even climb between his dad and the steering wheel if they’re in the car. Harvey even has his own Instagram account @HarveyBGSU.

Harvey is a great testament to the importance of service dogs; he also shows how a relationship between a dog and a person can be as strong as any friendship. Service animals are common in the world today and it is important that we understand how to treat them. While Harvey has many friends at BGSU, he also has “ASK FIRST” on his vest meaning to make sure you ask his owner permission before interacting with the dog. Many service dogs are not supposed to be pet or distracted, so it’s important to also not be upset if their owner says not to touch them.