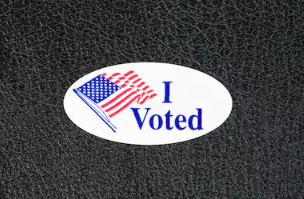 President Theodore Roosevelt said it best, “A vote is like a rifle: its usefulness depends upon the character of the user.” Our politics today are very much like a house of cards.

Democratic institutions are beginning to unravel from attacks found both within the country and outside of it. Basic and simple qualities that make us halfway decent people – honesty and integrity – are fleeting more and more everyday.

What is going on in Washington, D.C. and many other places across the nation is unacceptable. We can continue staging rallies, protests, going to town halls to voice our opinion, and marching – all noble pursuits which should continue to occur.  None of it matters if you don’t go out to vote.

Outsiders from across the country look at the United States and wonder, “Why do so many people fail to vote?” We, as a country, are very fortunate to have this right while so many others do not.

Some feel voting is a choice between the “lesser of two evils” and that abstaining from voting will help make the change they desperately want. Unfortunately, that means evil will still prevail.

Numerous examples can be found where people decide to boycott the ballot box, the biggest and most notable example being the 2016 elections.

Because most of us will never run for office, voting is the best way to influence  who gets to represent us.

It’s very unfortunate then to know that millions still decide to stay home on election day. According to the Pew Research Center, a “nonpartisan fact tank that… conducts public opinion polling, demographic research, media content analysis and other empirical social science research,” “only 49.4% of millennials who were eligible to vote actually voted.”

That is only a 3% increase from the 46.4% recorded in 2012. Keep in mind that those numbers are for a presidential election cycle. This year is a midterm election.

This year Ohio will have all three: Richard Cordray vs Mike Dewine for Governor, Rep. Jim Renacci vs Senator Sherrod Brown for Senate, and John Michael Galbraith vs Rep. Bob Latta for Ohio’s 5th Congressional District.

This year’s midterms are, without a doubt, one of the most important in our country’s history and here’s what you can do to be a part of it: register to vote.

If  you meet the following requirements you can vote:

Many of the seniors at the high school have busy schedules. Remember, you don’t need to go in person to register to vote. You can also do it online or through the mail. If you are under 18, you can still help too. Help people get signed up and encourage them to vote!

The deadline to register is October 9th while the election is November 6th.

Every  vote matters, including yours. This midterm election is one of the  most important in recent history. Help make a change and get the right people in office so that you can look back and be proud. That won’t happen if we don’t get out and vote. As President Abraham Lincoln said, “the ballot is stronger than the bullet”.