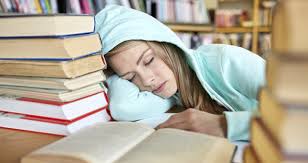 Picture this: You are driving home from an evening sports practice. The morning after, you sluggishly get out of bed at the last second and rush off to school. Throughout the day you continue to feel more and more run down- sometimes even falling asleep during classes. Your attention fades as the day progresses, and you feel like you are going to pass out. By the end of the day’s practice, you’re desperate to sleep before you can even think about starting your homework.

This is how students with sleep deprivation live. Sleep deprivation is the situation or condition of suffering from a lack of sleep. A National Sleep Panel concluded that students need between eight and ten hours of sleep per night, but two-thirds of seventeen-year-olds report that they are only receiving less than 7 hours of sleep per night. Because of this, 20-30 percent of high school students fall asleep in class; 56 percent of students have operated a vehicle while drowsy, and 1 in 10 teens report actually falling asleep while driving (schoolstartlater.net).

Recently, the Perrysburg Schools District has pushed back many of its school start times. Although it has received mixed reviews, the school start times being on the later side actually helps students rather than hurts them. According to theconveresation.com, the typical teenage brain does not begin to fully function until about 8:00 AM. Based on the new start times for the district, the majority of students are actually starting when their brains are ready to function.

Even though school starts later for most of the district, it is still important to get enough sleep at night to function properly during the day. A few ways that students can get more sleep is to make it a priority, establish a sleep schedule (and stick to it!), don’t eat, drink, or exercise a few hours before your bedtime, and avoid television and phone screens in the hour before you go to bed.