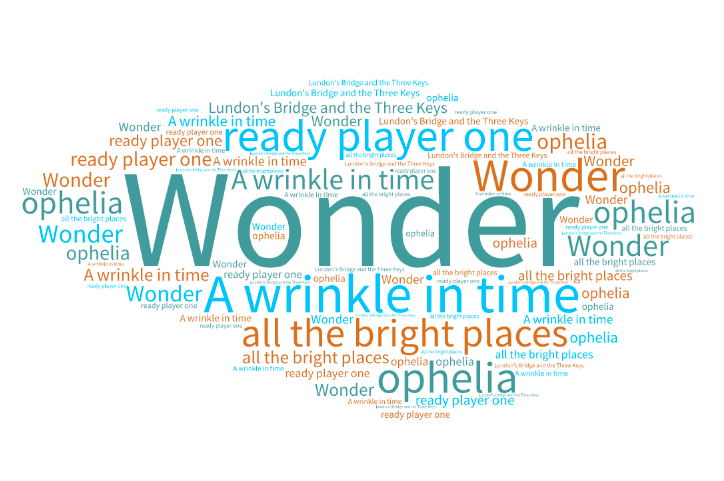 The book Wonder by R.J Palacio became a movie on November 17th, 2017. Wonder is about a kid named Auggie who has a facial deformity. His evolution of growing up and dealing with his disability changes many times and the lessons readers will learn from the book are extremely powerful. The part of the movie that I believe will grip audiences is when Auggie takes his astronaut helmet off to go to public schools. This movie stars Julia Roberts, Owen Wilson, and Jacob Tremblay. 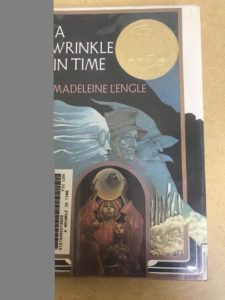 The book A Wrinkle in Time by Madeleine L’Engle will be released on March 9th, 2018. This book is about Meg Murray has a brother named Charles Wallace and a friend named Calvin O’Keefe. The friends go off on a revolutionary adventure through the book to rescue Meg’s father. The actors who will be in this movie are Rowan Blanchard, Reese Witherspoon, Mindy Kaling and Oprah.

The third book is Ready in Time by Ernest Cline being released March 30th, 2018. This book is about A group of teenagers obsessed with multiplayer online game OASIS. One of the teenagers, Wade Watts, experiences a huge treasure hunt in the online world to find the fortune left behind by the deceased creator. The people starring in this movie is T. J. Miller and Simon Pegg.

Yet another book-to-movie adaption is All the Bright Places by Jennifer Niven. This wanderlust book is a love story of a girl and a boy who ironically end up saving each other’s lives. That is all I can say without saying too much, but the book was phenomenal and I highly recommend seeing this. There is not a specific date set in this movie other than 2018. The movie will star Elle Fanning. 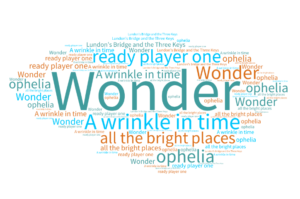 Shakespeare fans out there, Ophelia by Lisa Klein will become a movie in 2018. This book is a retelling of the story of Hamlet; however, his story is now from the girl Ophelia’s perspective. The people starring in Ophelia are Star Wars actress Daisy Ridley as Ophelia, alongside Harry Potter actor Tom Felton, as her brother, Laertes.

Lundon’s Bridge and the Three Keys is a final exciting project in development from the book by Dennis H. Christen. The book is about a war between land and the sea. Characters work together to find a way to bring it to an end. This movie will be starring Paris Jackson. The release date for this movie is 2019.