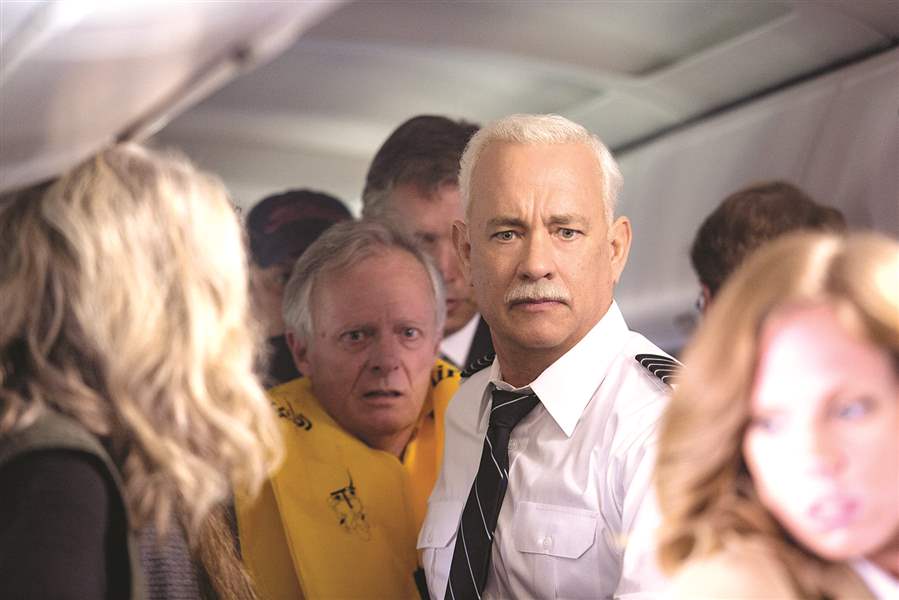 I know it’s a little late in the game for this review because the movie was released in September 2016, but if you haven’t seen it, here’s a quick review of Sully.

The first time I saw the trailer for Sully on YouTube, I was intrigued. This was because in my opinion, any true-story movie that portrays Tom Hanks as the main character does a fantastic job in reconstructing the real incident. Hanks has been in a handful of true-story movies. Movies such as Captain Phillips, Bridge of Spies, Apollo 13, and many more.

Well, Tom Hanks just made another return for his role in Sully.

In this movie, Hanks portrays Capt. Chesley Sullenberger; the pilot who landed a passenger plane in the Hudson River after being hit by a flock of birds. 155 lives ended up being saved as a result of the emergency water landing. Alongside first officer Jeff Skiles (played by Aaron Eckhart) the two experience the aftermath of the accident and the perilous process of dealing with the NTSB, or the National Transportation Safety Board.

As an aspiring filmmaker, I examine everything I can in a film. The acting/actors, the cinematography, the coloring, as much content as I can. I’ve watched many horrible films and many excellent films, but this movie particularly sticks out.

I’ve never watched a real-story documentary as a pilot/survivor driven movie. To break down what I mean, the movie continuously switches between different people within the plane as the crash was happening. The sub-plot between the survivors helped bolster the movie and managed to keep it from getting stale.

A neat little detail in this film are the depictions of the accident though Sully’s everyday movements and memories. In one scene, the movie touches on Sullenberger’s past as a pilot in the Air Force, and how he went through a similar incident years before the emergency water landing. Air Traffic Control told him that he wouldn’t make it down to the runway, but he safely landed the smoking aircraft. This is comparable to the water landing, only reversed. ATC was telling Sully he could make it to the airports around him, even though he knew he couldn’t, and evidently ends up landing in the Hudson river. There are other scenes like this throughout the movie.

Aside from the references to the crash, there were a few things that didn’t click with me. Something I really did not like was the film score (music). It was too minimalistic to really convey the dramatic nature of the film. If I were to put the film score type into a meter, there would be overly-dramatic on the right, not dramatic enough on the left, and mediocre in the middle. This film score is just below mediocre. This is because when the people on the wing of the plane were being saved, it was simple piano music with a cello playing, like a stereotypical New York soundtrack. It just did not fit. I feel it should have been more dramatic than mediocre, but just enough to make it feel like an impactful sequence in the movie.

Another thing I didn’t like was the recycled element of time hopping. In the beginning of the movie, we start out in the initial situation, where the plane is slowly going down. Well, this ends up being one of Sully’s night terrors. Then we go forward in time to after the accident, and then we go back to the accident. After the actual accident occurs, this leaves us at the NTSB hearing, where the accident is discussed among the two pilots and the attending members. Nearing the end of the hearing, the leader of the hearing plays the black box recording of what happened in the cockpit. The whole crash scene replays itself again. As of now, we have 3 different times that the crash is played. This became boring and started making itself predictable.

Final thoughts: this is an interesting, non-artificial perspective into the 4 different people on that plane and the first responders that came to help. They were all different scenes conglomerated into one. The cinematography is beautiful, the video effects are flawless, and had the movie not been cast with the actors it had, I think it wouldn’t be as successful as it is right now, with over 238.5 million generated from box office sales.

In the terms of a fictional storyline, it is very hard to do what the movie Sully did with a superhero or other fictional character. Even if Sully was based off of a real incident, very skilled writers would be needed to craft a fictional story that is as enthralling as the movie.