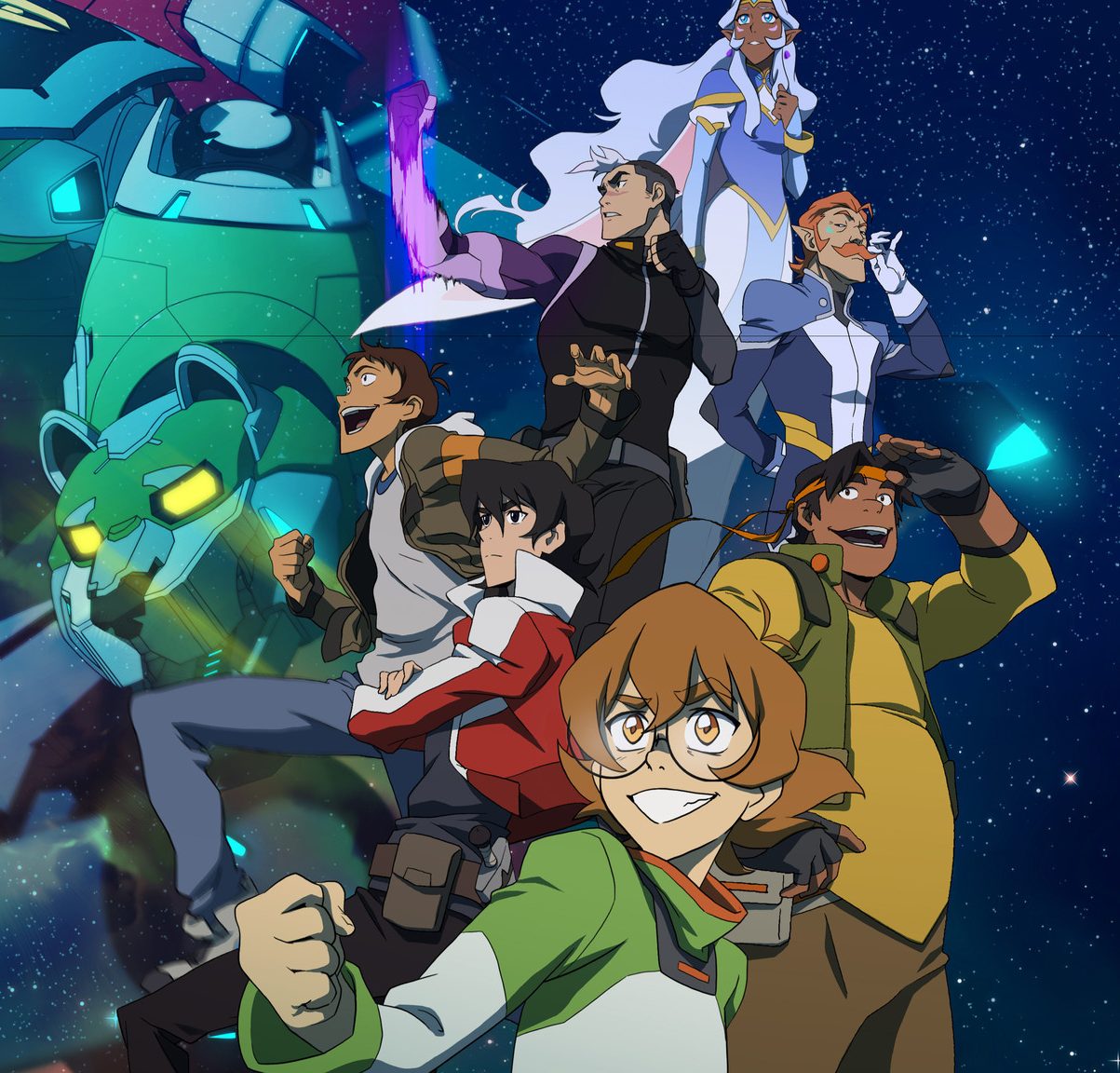 Dreamworks Animation Television teamed up with Netflix in 2016 to bring back an 1980s classic: Voltron: Defender of the Universe. Debuting exclusively to Netflix users on June 10, the new series entitled Voltron: Legendary Defender became an overnight hit. Season 2 was released on January 20th, 2017.

Takashi Shirogane (played by Josh Keaton), is the pilot of a science mission launched to investigate one of Pluto’s moons, Kerberos. During their mission, he and his crew disappear; their deaths are classified under ‘pilot error’. We flash forward to one year later and are introduced to three Galaxy Garrison cadets training for the space program: Lance McClain (Jeremy Shada), Pidge Gunderson (Bex Taylor-Klaus), and Hunk Garett (Tyler Labine). After an impromptu team bonding expedition, the three teens witness the crash of an alien ship containing ‘Shiro’ inside. They join up with former cadet Keith Kogane (Steven Yeun) to break the pilot out of containment. After a long trip, the five find themselves out in the desert searching for the source of some strange energy readings, literally falling across a gigantic blue mechanical lion.

The lion responds to Lance and blasts off with the five into space, bringing them through a wormhole leading to a distant planet named Arus. It brings them to the Castle of Lions, where they are met with the last two Alteans, Princess Allura (Kimberly Brooks) and her advisor Coran (Rhys Darby). Allura recruits them as the five long lost Paladins of Voltron to combat against the Galra Empire, who is taking over the universe one planet at a time.

So- childhood nostalgia and affection aside- Voltron: Legendary Defender is a fantastic recommendation to anyone who was a fan of Avatar: The Last Airbender and The Legend of Korra. The show’s staff is made up of members from both hits, and also recruits Studio Mir, the artists behind Korra.

Not only are we familiar with the staff’s work, we also know most of the cast members: Josh Keaton has appeared in Disney’s Hercules and other cartoons like Transformers: Prime, Kimberly Brooks is known for her role as Jasper in Steven Universe, while Jeremy Shada voices Finn the Human in Adventure Time. Steven Yeun plays Glenn on The Walking Dead, Bex Taylor-Klaus is on MTV’s Scream, and Tyler Labine provided a voice for Pixar’s Monster’s University.

Creating a blend of the old with the new, Legendary Defender is taking a more story-driven path for the Paladins. The creators are planning on story arcs for future seasons, with hopefully more twists and turns and lacking- pardon the 30-year-old spoiler alert- a major character death. In a interview with Wired, producers Lauren Montgomery and Joaquim Dos Santos likened their vision of Voltron to The Walking Dead. There are certain things that they plan on hitting, but they also wish to forge their own path for these classic characters.

The show is aimed for families to watch together. Some of the humor is a little underhanded for younger kids, like in most Dreamworks movies. Some of it seems a little awkward for older viewers.

All of the environments that have been designed are super cool, the paladins are traveling to new places such as creature-planets called Balmeras, racing through astroid belts, crash landing on a frozen water world, and going to the farthest reaches of the universe.

A lot of the characters have been further developed as well, so that each of them have the potential to grow into something more. Keith, in the original series, acted as the main protagonist, while other characters like Lance, Hunk, Pidge, and Sven were not actually focused on a whole lot. In Legendary Defender, Pidge has their own personal mission that acts as a secondary plot line. We get to see each character’s personal experiences: Shiro struggling with PTSD from his imprisonment, Lance dealing with homesickness, Hunk and his anxiety, and Keith is given his own story arc in season two.

Voltron: Legendary Defender is a really cool spin on the old cartoon. There is great potential for it to grow into, and the show’s staff is already taking advantage of that. Personally, I love the art style, the characters, and the designs of literally everything in this show, so I’m super excited to see where they plan on taking it.