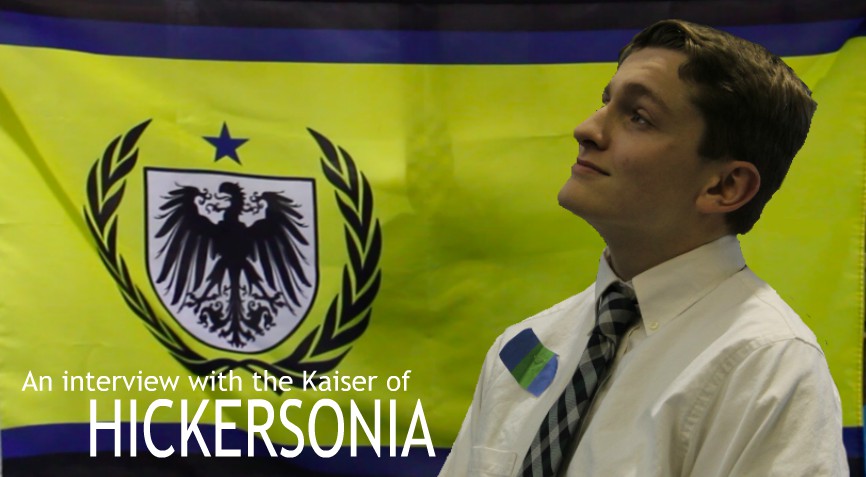 Fiscus: Hello, I’m here with Brayden Hickerson, the founder of his own micronation, Hickersonia. Now I got to start out asking — what is Hickersonia?

Hickerson: That’s a complicated question, Lucas. Hickersonia, for me, is a way for me to reach out to people I know — my peers — and to unite them as a common front.

Fiscus: Why did you start Hickersonia, was it a joke? What causes a man to make, not only his own micronation, but this real flag that if you’re watching the video, you can see right here is a very actually nice flag. I got to ask, why did you do this.

Hickerson: Well that’s actually a question I have an answer to. 2015, May 4th, was when Hickersonia declared independence.

Hickerson: From the United States of America the lead up to this was at the start of May I was browsing my YouTube recommended list and I saw this video — “How to Create Your Own Country,” and so I thought it looked interesting so I watched it and listened to all these cool things and then I thought I can do that. And so I did. This particular flag was a co-project by me and my Chancellor, Hayden Momberg, and this was actually gifted to me by Hayden Momberg.

Fiscus: This flag is beautiful, like actually it’s made out of flag material. It’s surprisingly well made.

Hickerson: It’s $17 from a company currently being investigated by the Federal Trade Commission.

Fiscus: We won’t get into that. So, what about your outfit? You’ve recently been seen wearing this flag as a cape. Is that something you would let other Hickersonian citizens do if they had their own flag cape? Or is that only for Hickersonian royalty?

Hickerson: Well, if they have their own flags, they are within their own right to do whatever they want with it, as this is a free country. Hickersonia is a free country — free under my leadership. But it is my belief in the year 2020, capes are back in style.

Fiscus: Very, I am all for that!

Hickerson: I seek that when we establish our own uniforms for the Hickersonian government and military, they will all have capes, including my own.

Fiscus: What are some Hickersonian policies?

Hickerson: Well, that’s a complicated question, actually. Personally, I am a left-libertarian although Hickersonia and its government style is a right-authoritarian government.

Fiscus: Why do something so different for your nation so far from your personal beliefs?

Hickerson: Oh well I seek to be an enlightened person I believe in the idea of an enlightened despotism. I want to be open-minded, welcoming of all ideals and just take inspiration from everywhere. I want to be Greek-levels of influence. I seek to welcome all religions. I don’t I don’t discriminate based on religion. If you are a Muslim, if you’re a Hindu, Buddhist, whatever — you will have equal opportunity if you want to be Parliament if you want to be Chancellor even if you have the skill you can have the position.

Hickerson: That’s part of history at this point. The first stage, of course, is the original public founded May 4th, although it was brought into existence May 5th, 2015. And that soared to great heights, it was deteriorated over the summer of 2015 although it survived into the 6th grade 2015 and 2016. The summer of 2016 saw complete destruction of Hickersonia. Hickersonia was “bombed.”

Fiscus: Bombed by whom?

Hickerson: Uh, that is yet to be known.

Fiscus: Okay, do we have any theories?

Hickerson: Well, some say it was actually, the uh…might have been the moon Nazis.

Hickerson: I don’t mean to make any conspiracy theories.

Fiscus: You said you wanted to run for student council. I’ll give you now the floor if you want to say anything for next year. Are you on the student council this year?

Hickerson: I am not.

Fiscus: So you’re trying to run for student council. Is there anything you would like to say to the voters, or whatever?

Hickerson: Well, I have run for Student Council twice now and I have failed those times although I have come quite and close. I blame my first failure on the fact that I did not campaign, although I managed to still get a majority of the vote somehow — not a majority but a plurality. The second time I campaigned, but I do not believe I campaigned effectively. I will say this: you should vote for me because I am the Kaiser of the people of Hickersonia. I am a leader, although I may not be a very good one I will try my best to be a good leader.

Fiscus: That’s amazing, I’d just like to say thank you.

Hickerson: Thank you for interviewing me.

Fiscus: This is Brayden Hickerson, leader of Hickersonia.