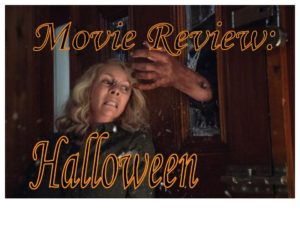 Looking for a bit of horror nostalgia with a modern-day twist? The Halloween franchise added its newest addition, a rebooted Halloween, on October 19th, 2018.

Halloween ignores the previous sequels in the franchise and picks up after the original movie, also titled Halloween (released in 1978), 40 years later. Michael Myers (Nick Castle is reprising his most famous role) is scheduled to be transferred to a notoriously brutal prison. After the bus crashes, Michael escapes and goes on another killing spree. Laurie Strode (Jamie Lee Curtis reprising her role as well) has been preparing for this night for many years and goes to protect her family, but has an ulterior motive…she wants to be the one to finally kill Myers. She must try to balance protecting her family and killing Myers once and for all.

Halloween is an R-rated slasher/thriller movie. It received an 80% on Rotten Tomatoes. Chris Evangelista says, “While it doesn’t capture the magic of the original, this Halloween brings much-needed closure to a troubled franchise…”

I understand Mr. Evangelista when he says that this movie isn’t as good as the original, but this movie helped to bring closure and offered a life-saving breath to such an iconic killer franchise. It helped reincarnate relic of the past back to life. The movie provides the modernization it needs to be relevant with the times, while still relying on some elements from the past that doesn’t make it a bore to watch. The twists and turns make it a fun and enjoyable roller coaster ride.

There have been many positive reviews from critics, and I would consider giving it a go if you’re looking for some frightening entertainment.