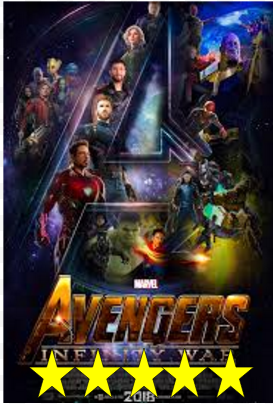 The highly anticipated third installment in The Avengers series is finally here: Avengers: Infinity War is the newest entry into the rapidly growing Marvel Cinematic Universe (MCU). Since the release of Iron Man, the MCU has been building up to this movie.

Infinity War features the cast of almost all of the MCU superheroes, fighting against the most powerful villain any of them have ever faced, Thanos. The plot without any spoilers is the story of The Avengers facing off against Thanos (Josh Brolin) who is trying to collect the six infinity stones: the mind stone, soul stone, time stone, power stone, space stone and the reality stone. With all six stones, Thanos would be able to wipe out half of all life in the universe, so it is up to the Avengers to stop him.

The movie really appeals to diehard Marvel fans but it still gives enough exposition to any newcomers into the MCU.

Overall the movie had little to no dead space when it came viewing; it made it seem like there were three different movies going on at once that then all combined near the end.

All of the jokes in the movie fit in and didn’t seem to try to make light of a serious moment. The ending is bound to leave audiences speechless, especially those who have grown attached to all of the characters.

In effect, the Russo brothers (the directors) outdid themselves in making Avengers: Infinity War, a terrific MCU triumph.