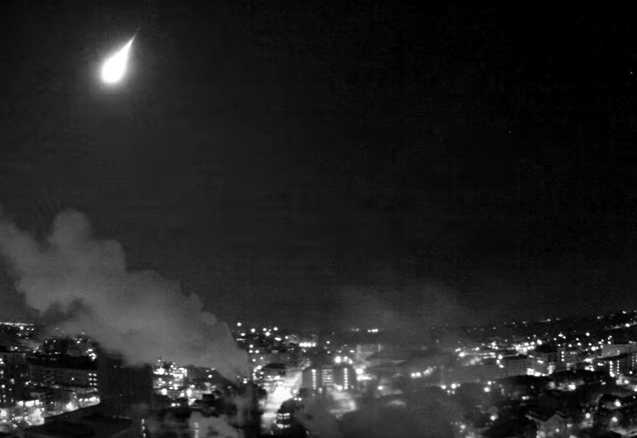 Just after 8 PM Tuesday night, a fireball meteor passed through the Earth’s atmosphere! This meteor formed a huge blast of light in the sky and was visible to 7 states and Canada. The states that it was visible in were Michigan, Ohio, Pennsylvania, Indiana, Illinois, Wisconsin, and Missouri!

The meteor itself was about 3 to 6 feet in diameter and that meteoroids similar to this kind enter the Earth’s atmosphere only about 1 to 2 times a month. Though, one that was this bright is very rare, especially in the Michigan and Ohio area. The Washington Post sources Bill Cooke, lead for NASA’s Meteoroid Environment Office at the Marshall Space Flight Center in Alabama, who shares that the blast of light was caused by a small asteroid that is about one to two yards in diameter and moving at a speed of 28,000 miles per hour. That’s really fast! Cooke also says that when it entered the atmosphere, the asteroid began to warm up, which lead to the astroid melting away and gave the intense light in the sky.

Many citizens were frightful and curious as to what they had seen.  The National Weather Service for Detriot announced on Twitter, “After reviewing several observational datasets, the NWS can confirm the flash and boom was NOT thunder or lightning, but likely meteor. We continue to monitor feeds from astronomical agencies for official confirmation of a meteor.” The meteoroid ended its little journey soon after it started though. It ended up exploding over Michigan and The United States Geological Survey or the USGS have confirmed that the explosion came up as a 2.0 magnitude earthquake since you could feel the rumbling and shaking of it all last night. Reports of the earthquake were felt well over 90 or so miles away, including the Toledo Metro.

Hopefully, you got a chance to see the very rare fireball meteor Tuesday night… if not, there are plenty of videos and pictures captured of it on the Internet and it was actually a Twitter Moment for a little while. If you did indeed get a chance to see it (or maybe even feel it), what are your thoughts on it?