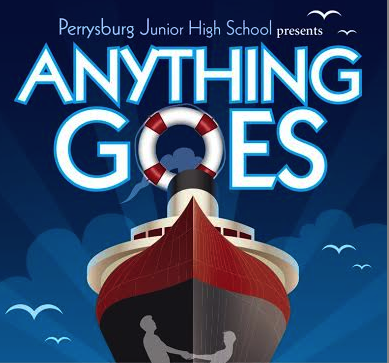 We all love the high school theatre productions. It’s been a month since the fall play has ended, and the Winter One Acts are not until the end of January. So where can a theatre-lover get their latest fix of a great show? By seeing the junior high musical this weekend!

This year’s musical is Anything Goes, the Tony award-winning show set in the 1930s on a ship traveling from America to London. It follows the story of Billy Crocker (played by Evan Boyers), a Wall Street broker who impulsively sneaks onto the ship to chase down his former lover and heiress, Hope Harcourt (played by Shea Vaquera). Crocker’s friend, Reno Sweeney (played by Rowan Creps), the female protagonist, is a nightclub singer also aboard the ship.

The musical features an array of songs by Cole Porter, along with amazing dance numbers that will hold your attention until the final bow. Anything Goes has a reputation as one of the most famous musicals, holding rank along with other prominent shows such as Mamma Mia, Mary Poppins, and The Wiz.

Another reputation that it holds is that of promiscuity; the musical has its fair share of mature content. This begs the question, how does a junior high handle this material, and perform it well?

“We try to balance it out by teaching some of the adult humor but also leaving some of it up to mystery for the adults that are coming to the show,” says Katie Driscoll, choir and musical director at the Junior High. “Some of it we changed to make it a little more junior high appropriate…but they actually did a really nice job with a lot of the adult humor, which can be a challenge especially for a junior high cast.”

Along with that challenge, a new change of the production is its performance in the Winter, when previously the musicals at the junior high have been performed in the spring. Rowan Creps, an 8th-grader playing the role of Reno Sweeney, says that the experience is different. “I like it because now that it’s earlier it really just gets you pumped up” she explains. “I feel like it’s more fun because now we have something to do at the beginning of the school year.”

More fun, indeed. Sitting in for a few minutes at a rehearsal for the show, the talent and excitement was evident. Sailors and showgirls danced and sang through one of the more lively songs in the show, “Blow, Gabriel, Blow”. The chorus was smiling as Reno and her “angels” dazzled with fast-paced dance moves.

If you decide to see the show, there will be more friendly faces than you might expect. The technical crew of the show is actually staffed by high school students!

One of the many familiar faces you might see is senior Spencer Tye, who is working sound for the show. “I like all the aspects of sound,” says Tye. “How its a really important job and without it, it would make the show fall apart because the audience wouldn’t be able to hear it.” He also likes that it gives him an opportunity to make the sound his own, adding that “its just a blast.”

“I just love helping out in theatre,” says another senior Geoffrey Mintz, on the lights tech for the show. “Technical theatre is one of my favorite things, so its a pleasure for me to work here.” Mintz has been involved with technical theatre for 7 years and is in his 2nd year helping out with the junior high musical. He has particularly liked the date change for the show, saying that it will be nice timing with the Michindoh camp. “Now that [the musical] is in the winter time, we have more time during the month that [camp] usually is so we can do Michindoh.”

Regardless of the new changes that took place this year, this show is bound to be a showstopper no matter what. “It’s awesome,” Driscoll says. “There’s lots of dancing and high energy. It’s going to be a great show, there’s a huge ship on stage and lots of fun elements.”

Creps says her favorite part of the show is the process of watching it come to life. “I really like to see how we start off and then watch as the show progresses and how everyone puts their own little twists on it and how they bring it to life.”

And with opening night approaching, audience members will finally get to see the life brought to the stage with all the hard work these kids have put into it, an effort that will surely not disappoint. If you are interested in seeing Anything Goes, there are two 7:00 pm performances December 8th and 9th, and one 2:00 pm performance December 10th. Tickets can be purchased at the door one hour to performance.