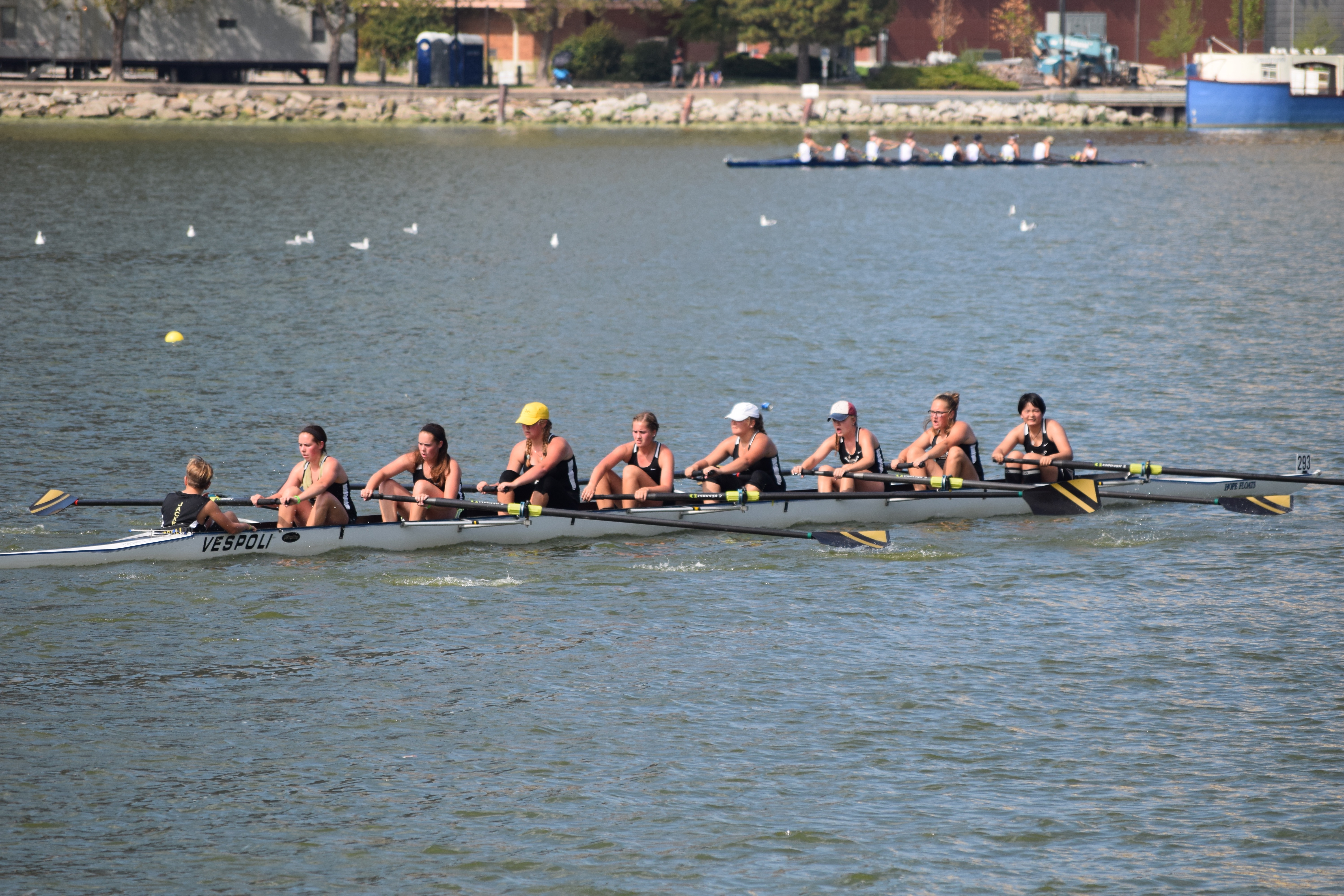 So what is the FROGTOWN REGATTA?  Rowing teams come from all over to race each other on the Maumee River.  The teams start showing up and getting ready by 6:30 am.

Our own Perrysburg team was there by 6:45 for coxswains and scullers and the rest of the team was there by 7.  The first race would not start until 8, yet the teams will start rigging the boats, attending coxswain meetings, stretching and fueling up with food and water.  Usually about a half hour or more before the race, teams carry to the water and down the dock.  Once rowers have the boat in the water they get the oars into the oarlocks and all members of the team get into the boat.  Finally, you push off and start rowing.  NO, this is not the race!  You have to row your boat the full race length to the start line.  In the Frogtown case, this would be 2500 meters.

The fall season races are all timed races.  Once you are released you row hard to the finish 2500 meters away.  Your cox will push you as hard as he or she can.  Your hands might be forming blisters while you concentrate on setting, tapping, and rowing.  You might hear parents screaming for you to keep going and you are doing great or you block that all out and just hear the oars hitting the water.  Then the finish line comes, you have rowed about 3 miles — SORRY, you are still not done.  Now you row back around to the docks, take the boat out of the water and carry it back to the trailer.  Now you are done, MAYBE. Do you have another race most do? It might not be long until your next race, you could hot seat right into another boat.  So here you go all over again.

This is what our Perrysburg Rowing Club loves to do.

On September 21st, when the Lucas County Health Department issued a recreational public health advisory for the Maumee River, rowers were concerned. Though the water is still safe to drink, the department advises that, “If you have been in contact with water associated with the algal bloom, rinse your skin immediately.” Teams knew that the Frogtown Regatta was at risk.

The advisory wasn’t about to stop the 33 clubs entered in the Frogtown Regatta just two days later on the 23rd. One of those teams was our own Perrysburg high school rowing club, who last year had a women’s double go on to place 7th in the nation at the nationals in Camden, New Jersey.

To deal with the issue of the algae on the water the Frogtown Regatta and the Lucas County Health Department worked closely together to make sure the water was safe for all the participants. Just a day after the first advisory was issued it was found that the conditions on the course were within safe levels and the regatta would go on.   The regatta did take precautions and had showers available for the rowers after a race.

According to Ethan Gruden, an eighth grader and coxswain for the Perrysburg team, Perrysburg rowers are, “grossed out and angry with the algae because it affects the way we row. The rowers also have to be really careful with the algae so it does not come in contact with their skin.”

The Frogtown Regatta was Perrysburg’s only regatta that is in Toledo this season, but that doesn’t mean that you shouldn’t try to watch a regatta sometime. “People should come to regattas to watch a unique sport and to come enjoy the environment. It is a very fun place to be to enjoy yourself. It is really cool to see the boat in motion with everybody in time, it looks like a piece of art,” Gruden happily expressed.

“Perrysburg will have a great rest of the season, each week each boat is getting better and better with the things that they need to improve on. We are getting to know each other more which helps us in races. Each rower is getting stronger as an individual. We are introducing sculling some more so we can have more variety. We are having more and more fun with each other and the sports every day.”

Other stories By Riley Pierce: