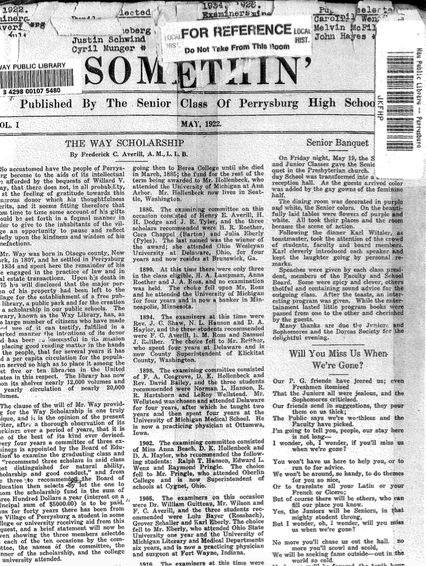 If you’re reading this, you obviously know that PHS has an online newspaper called eSomethin, but did you know that it was originally an actual newspaper?

The Somethin was established in May of 1922 and became an online newspaper in 2012. The oldest college newspaper was founded in 1799 and the oldest high school paper is from 1881.

I had the opportunity to dig up the first edition of the original Somethin’ from 1922. It includes articles about the senior banquet, scholarship opportunities, and sport statistics.

I was able to interview Kathy Crowley, who was on the Somethin staff in 1982 and ‘83. She won an award from the University of Toledo on her article about the greater Toledo area’s local mosque in 1983.  “The paper focused on student activities, district information, and informative community pieces,” she said. “Being on the Somethin staff allowed me to compete in something other than my sporting events.”

In the early issues, partially because the school was so small, honor rolls, birthdays, and jokes were printed. Most of them were just very bad puns. There were also interactive things such as crossword puzzles published.

One thing is for sure, however, Friday night football games have been around as long as The Somethin has. In one of the first articles I was able to find, PHS was mourning a 20-0 loss to Whitmer. (I know, ironic!) Apparently, our marching band has been a show stopper since its start in 1931. The Perrysburg Maumee is also an ancient tradition; the earliest mention I could find was in an issue from 1939.

In earlier years, staff published an April Fool’s edition called the Nothin’. The Nothin’ consisted of fake stories such as the Beatles coming to Perrysburg, wasabi lunches, a strange UFO, sexist class schedules, Ritalin in the drinking water, a pregnant buzz, and the donation of an escalator.

Near every national holiday, plus some, were covered in the Somethin. There is an edition from January of 2006 covering Friday the Thirteenth and countless ones relating to Christmas, Thanksgiving, and Halloween.

We covered the election of President Obama, John Lennon being shot, and the attempted assassination of Reagan.

In 1980, it is even mentioned that Erik Lutz, who was a junior at the time, won the JAG BMX Amateur World Championship. In ’83, the building of the Mosque was covered.

History is still being made!