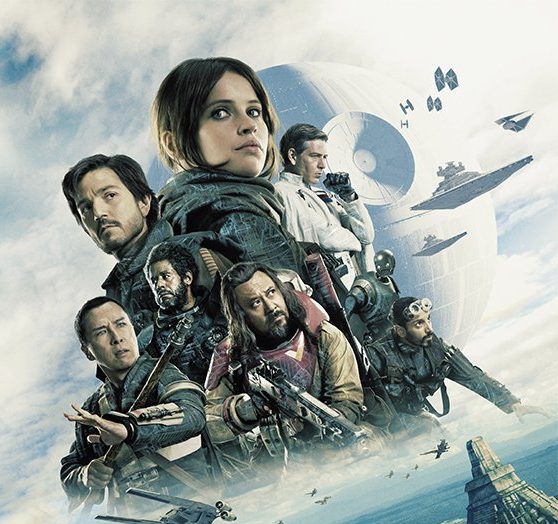 Rogue One: A Star Wars Story was awaited with nervous energy for its release on December 16, 2016. It was startling to hear that most of the film was scrapped and had to go back to shooting, making it very different than what fans were expecting from the trailers. The film is rated PG-13, and playing in local theaters.

Rogue One tells the story of the mission that brought a second chance to the Rebel Alliance. Jyn Erso (played by Felicity Jones) is the daughter of an Imperial scientist who is taken from his family. As a miscreant with connections, she is recruited by the rebellion. She and Captain Cassian Andor (Diego Luna), along with a reprogrammed K-2SO droid (Alan Tudyk), are sent to retrieve a message from Jyn’s father smuggled out by a Imperial defector named Bodhi Rook (Riz Ahmed). The hologram contains information vital to the survival of the Rebels: the trap Jyn’s father has hidden inside the Death Star out of the Empire’s sight.

Overall, the film is a pretty cool addition to the Star Wars franchise. The ending of the movie fluidly leads us into the beginning scenes of A New Hope (1977). The late Carrie Fisher’s role as Princess Leia is reprized in the last minutes of the film. However, if you’re expecting the happy endings of the original trio, you’re going to be sorely disappointed. Rogue One is more bittersweet, and it isn’t hard to figure out what direction the crew is heading in the final 45 minutes of the movie.

What’s also cool about Rogue One is that it can also tie into Disney XD’s Star Wars Rebels. The series is intended to fill the gap between Episodes 3 and 4. Throughout the film, you can find various nods to the show, including glimpses of Rebels droid Chopper on the Yavin-4 base, and well as some of the characters and their ship hanging out in the background.

In the end, I would definitely recommend Rogue One, even if you aren’t a fan of the Star Wars saga. The film was a great war to fill in the information on how Leia got the information on the Death Star to deliver, and sends us back into the nostalgia of the original movies. K-2SO’s bluntness also brings a humorous element to the mission.

This wasn’t initially a film that I was looking forward to, especially since Star Wars Episode 8 is due out next year. Jyn’s story is a pretty good sci-fi movie on it’s own, but I think that it’s better that it falls under the Star Wars banner.