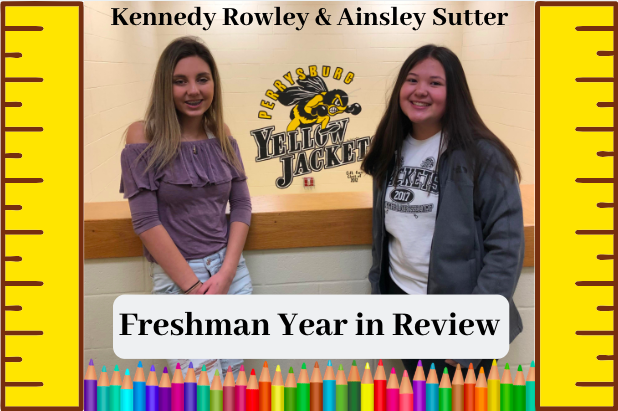 Transcript
Lucas: Hello, eSomthin listener! My name is Lucas Fiscus. I’m a freshman on the eSomthin staff. You’re about to listen to the first part in a two-part series where freshman on the eSomethin staff talk about their year — some of their favorite moments, some of their favorite aspects of high school. In this first part, Ainsley and Kennedy discuss what that they have experienced in the high school. I hope that you enjoy “Freshman Year in Review”.

Ansley: And we are freshmen here at Perrysburg High School.

Kennedy: And we’re also school news reporters on eSomethin.com, which is digital, and you guys should totally check it out.

Ansley: So, we’re making a podcast about freshman year with the other freshman in our class. We’re just gonna keep it light-hearted and fun and give you some advice and stuff.

So, we’re going to start off with the first story, and it’s about football games, and how, like, fun they are. They may seem like “Oh, football games, oh, we’ll go to them for all our lives” but in the high school, it’s different because you’re in the student section and stuff. You get to dress up in a theme and you go up to the student section and jump up and down, and fall off the bleachers. Definitely never happened to me. Umm, but it’s so so so much fun. Definitely recommend going to the first game. It may be scary at first — it was for me — but it’s so much fun.

Kennedy: And my favorite memory has been, definitely, by far, Spirit Week! It is hands down the funnest week of your high school career. So, basically, like in junior high, no one dresses up for their spirit week, and that’s like, pretty lame. But in high school, people like actually dress up and no one cares anymore about like who’s dressing up. You’re not the weird person [for dressing up], you’re the cool person if you dress up because everyone’s dressing up. Also, there are random chants that break out in the hallway (I was not expecting it) I was like, “Woah, what’s going on? I’m trying to get to my English class.” And I was like, “Woah, this is cool, I’m joining in” and you just run in and start chanting like “M A U L, Maul Maumee” and it’s, like, so much fun.

Ainsley: So, then, our little bits of advice: we have, like, four, I think. So, the first one is don’t try too hard. Like, I get looking nice is like super fun and stuff, but at the high school, you like — the little girls wear like heals and the boys always look like, clean cut, but people at the high school –definitely, they look like nice and cute all the time, but there are days where you can literally wear like sweatpants, or sweatshirts or leggings, and you are totally fine and nobody notices and that’s so much easier.

Kennedy: Our second piece of advice is don’t be on your phone too much, because if you’re, like, on your phone all night, and then you wake up early to go to school, you’re not going to be ready for your classes. I bet you won’t have any of your homework done at all, and it will be hard on you’ll be like dragging throughout the day.

Ainsley: And, they say, like, sleep is important and like “Oh, yeah, we all know that,” but really, sleep is so much more important in high school. You can be, like, “Oh, yeah, I’ll sleep on the weekend,” but you really, like, don’t sleep on the weekend, like, you’re always busy. Like, I know with my friends and I, we’re at, like, always at Waffle House a lot, or like, at the movies. We never have time to sleep. We’re up all night on the weekends, so sleep definitely helps.

And another one is get involved, like join the sports, join the clubs and then, yeah, like, get involved. It’s fun, trust me, it’s fun. Not weird like it is in junior high.

Ainsley: We have one last piece of advice: actually, we had five, not four, but get and make friends. You may be like “Oh, I’ll have the same friends I had in the junior high, but you really won’t. Like, with their classes and clubs and stuff, you’ll become friends with others in the clubs and sports and definitely stay friends with your other friends, but you’ll just cling to like the sports and teams because your practice schedule lines up a lot. I know I didn’t play school sports before, but school sport takes a lot out of you. Like, I have gone to bed at 8:30 for the past couple of weeks. I’m tired from practice.

Kennedy: And, um, I’ve been like, I get home from practices at like 7, so I’ve been, like, doing my homework all the way ‘till ten o’clock, eleven o’clock, and then I finally shower, and by the time I go to bed it’s already twelve o’clock most nights

Ainsley: And you just crash like you, yeah… it’s a lot harder than the a junior high. I know it may not seem like it but I promise you, it is. But we can also promise you that it is so much fun and the rectangle with a hallway in the middle (the Commons) is not as scary as it seems. So, I hope you learned something from our little podcast, and I hope you enjoy what our other freshman in the class put on, because we have no idea what they are doing, and check out eSomethin.com, the Perrysburg High school newspaper.

Kennedy: Thanks for listening.

Lucas: Thank you for listening to part one of the two-part “Freshman Year in Review” podcast. Next episode, Shane and Andrew talk about some of their experiences at the high school. Stay tuned to the eSomethin website, we plan to have episode two out as soon as possible. So just stay tuned for that. Thank you!