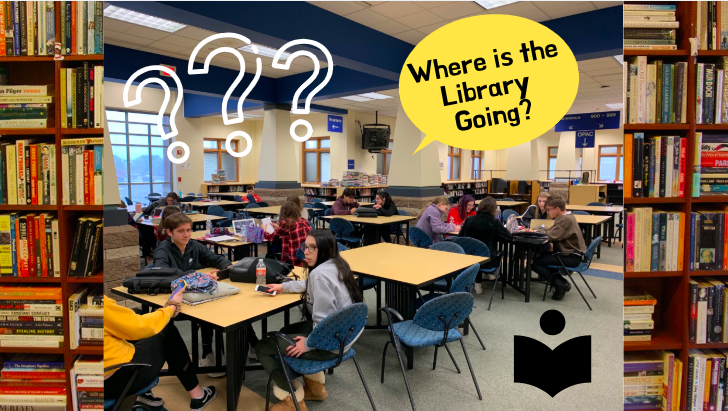 Next school year will be the first year that Perrysburg High School will not have a library.

Students will no longer get to spend their study halls in the Media Center because it will have a brand new look, transforming into two new classrooms— one for robotics and one for physics. The area will also feature a new, more secure entry way for visitors during the school day.

You may be thinking that it seems strange for a school to not have a library; this is a common reaction to the news.

Library assistant, Alyssa Hutchins, said that she “thought it was kind of dumb because what kind of school doesn’t have a library?”  She went on to say, “It’s just weird to imagine a school without a one. I remember in elementary school, I would always go to the library and pick up books.  But, now that I’m in high school, I never come to the library to get actually books.”

Along with Hutchins, many other students rarely use the high school library as an educational resource these days.  Students more-so see it as a way to socialize with their friends and escape silent study halls.

Dr. Michael Short, the principal, said that since the district has started the laptop initiative, “the circulation of material going out of the library has been really minimal.”  Because the Media Center is used less and less, the decision was made to “convert that space into something that becomes more functional for some of the classes we’re offering now.”

The transition of the library into classrooms is an example of the rapidly increasing PHS population.  In just 18 years, our large, rather new building, is already too small for our student population. Overcrowding problems will continue to arise as long as the PHS population continues to increase.

What’s going to happen to all of the books, you may wonder.  Where is our beloved librarian, Mrs. Trudy Nagy going to work?  If I need a book, where can I get one now? Where are all of the club meetings going to take place now?  Don’t be frightened, all of these concerns have already been addressed.

Mrs. Nagy is working hard to get as many books into teacher’s hands as she can.  However, the majority of books in the Media Center are outdated so they are simply getting recycled. As for Mrs. Nagy herself, she will not be leaving PHS! Her new title will be “Receptionist” and Jackets will be able to find her at the new area entrance.  She will also continue to assist with any computer difficulties.

If you need books, many English teachers have their own classroom-sized libraries with many great selections. Also, our community library, Way Public, has a huge variety of wonderful reads.

As for the club meetings, this issue has not yet been completely solved. Dr. Short is not completely sure of where meetings will be held, but says that “as things present themselves we are going to try to resolve the problem the best we can by figuring out how we can accommodate the space, the activity, and keep all of the classrooms good at the same time.”

Mrs. Nagy is not completely enthusiastic about the renovation.  She said,“I like having the study halls in here. I like being with the students, and now I won’t be with students that much anymore.”

Undoubtedly, many students will miss spending study halls in the library with friends. But, Mrs. Nagy suggests, “look forward to] the new adventure.”

Nagy has a great, positive attitude that we should all keep in mind during this new transition.