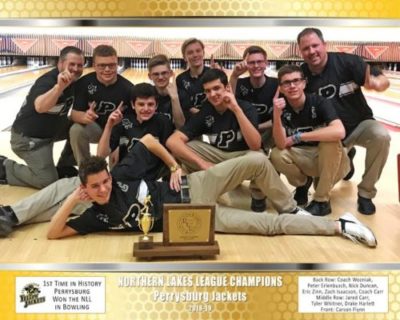 The month of February started with a bang. The boys bowling team won the Northern Lakes League title for the first time in bowling history at Perrysburg High! The bowling team came into the tournament tied at 7 wins and 3 losses with Napoleon. Anthony Wayne and Maumee were shortly behind with a 6-4 record. The stage was set for battles between all of these schools in order to capture the NLL title.

In the third and final game before the Baker game phase of the match, Perrysburg took over the first place spot by beating Anthony Wayne and being up by 25 pins.

After the first Baker game — the second section of a bowling event when teammates bowl certain frames of a single game — Perrysburg beat Anthony Wayne by 7 pins which brings up the pin count to 32. Perrysburg still led the event.

Winning the first Baker match turned the tide of the tournament because the Jackets were so energetic and ready to win. Every other teams’ shoulders were down and the Jackets spirits were soaring high and proud that we were about to win the league championship. The Perrysburg Yellow Jackets ended up winning the championship over Anthony Wayne by 158 pins.

Captain and Senior Carson Flynn said, “It’s pretty great. After 4 years on the team, finally winning the league for the first time in school history was really neat. We worked very hard over the 4 years, especially this year. We had the talent and we finally brought toward where we needed it to be.”

This is an accomplishment for the Jackets for being NLL champions in bowling for the first time in school history.