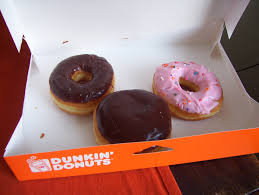 For the last few years, you had a very select amount of places to get your doughnuts. Most of Perrysburg’s doughnuts were coming from local grocery stores like Kazmaier’s, or from big chain stores like Walmart or Kroger. This will all change when, in this fall, Dunkin’ comes to Perrysburg.

The new Dunkin’ Doughnuts will be replacing the family-owned Greek American restaurant Charlie’s on Dixie Highway. A Dunkin’ spokesperson confirmed that they are expecting to open the next store in the Dunkin’ chain this fall. Even though they plan to open this fall, no date has been released for the official opening of the store. This will now be the 4th Dunkin’ Doughnuts store opening in the Toledo area.

I decided to go around the school to find student’s opinions on the new the Dunkin’. I had a chance to talk to Logan McGuire, a Perrysburg Senior, who was more than happy about the brand new doughnut shop.

All that is left for us to do now is wait for the brand new doughnut shop. An official date has not been given for the store, but Dunkin’ flags have already been set for the future store. So I think that the people of Perrysburg will be eating Dunkin’ doughnuts in no time.