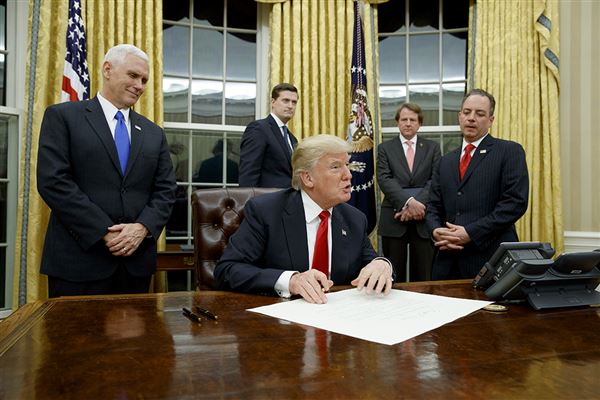 Many people are often shocked or outraged about the things that the President says, and rightly so. Donald Trump has made near endless comments that are either blatantly or interpreted to be homophobic, racist, Islamaphobic, sexist, and just plain mean. Trump’s entire career has been in the public light, so finding issues with the things he has said in the past and his administration is not hard.

Below is a list of quotes from either Trump himself or regarding his administration.

‘”When the conversation turned to gay rights, Trump motioned toward Pence and joked, “Don’t ask that guy—he wants to hang them all!”’ (NY times)

‘”At the White House, Pence has been hosting a Bible-study group for Cabinet officers, led by an evangelical pastor named Ralph Drollinger… he wrote, ‘Women with children at home, who either serve in public office, or are employed on the outside, pursue a path that contradicts God’s revealed design for them. It is a sin.” Drollinger describes Catholicism as “a false religion,” calls homosexuality “a sin,” and believes that a wife must “submit” to her husband.'” (NY times)

‘Regarding knowing Paris Hilton as a child, “Well, at 12, I wasn’t interested. I’ve never been into that … but she was beautiful.”’ (Telegraph.co.uk)

‘”You know, you’re in such good shape,” Trump said, before repeating the observation to her husband. “Beautiful,” he added.” Comment made to the First Lady of France. (Telegraph.co.uk)

‘”It’s really cold outside, they are calling it a major freeze, weeks ahead of normal. Man, we could use a big fat dose of global warming!”‘ (quotes from his Twitter found on CBS)

‘”26,000 unreported sexual assaults in the military-only 238 convictions. What did these geniuses expect when they put men & women together?”‘ (indy100.com)

Regarding his daughter Ivanka ‘“Yeah, she’s really something, and what a beauty, that one. If I weren’t happily married and, ya know, her father…”’ (indy100.com)

‘”Trump reportedly tells the widow of a US soldier killed in action, ‘He knew what he signed up for'”‘ (headline from Business Insider)

More recently he made a comment to Navajo code talkers veterans from WWI calling Elizabeth Warner “Pocahontas” while standing in front of a portrait of Andrew Jackson (Time.com).

“While Pocahontas’s name is not a racial slur in and of itself, the use of her name to describe one of his political enemies is certainly meant to be an insult…” said NBC.

Trump has also retweeted separate videos from Jayda Fransen captioned “Islamic mob pushes teenage boy off roof…” “Muslim Destroys a Statue of Virgin Mary!” and “Muslim migrant beats up Dutch boy on crutches!” all of which are horrible, but why is the president tweeting them?

Who could forget the iconic “locker room talk” with Trump on a bus in 2005? Nothing said was clean enough to transcribe.

“With all of the fake news coming out of NBC and the Networks, at what point is it appropriate to challenge their License? Bad for our country!”

“Trump says Fox’s Megyn Kelly had ‘blood coming out of her wherever’” (Headline from the Washington Post).

And on Wednesday, November 29th, he tweeted this. 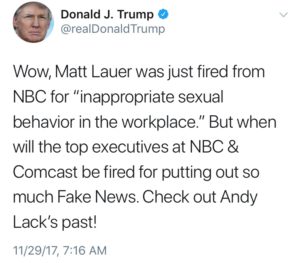 The real danger of these comments is normalization. By electing Trump, this country has made a giant step backward. While his approval rates are dropping, he is still in office.

It is now normal and accepted by many people to make these sorts of comments. It seems now normal to call peaceful protesters “sons of [expletive]” and when regarding white supremacists, saying that there are “pretty bad dudes on the other side also.” It’s apparently normal to joke about things that can get people killed like climate change and deportations. It’s apparently normal to make comments about the vice president wanting to kill LGBT people.

Trump needs to realize that he cannot just say whatever he wants anymore, that his words have serious repercussions. To the rest of the world, his words represent us as a nation. Is no one else bothered by that?