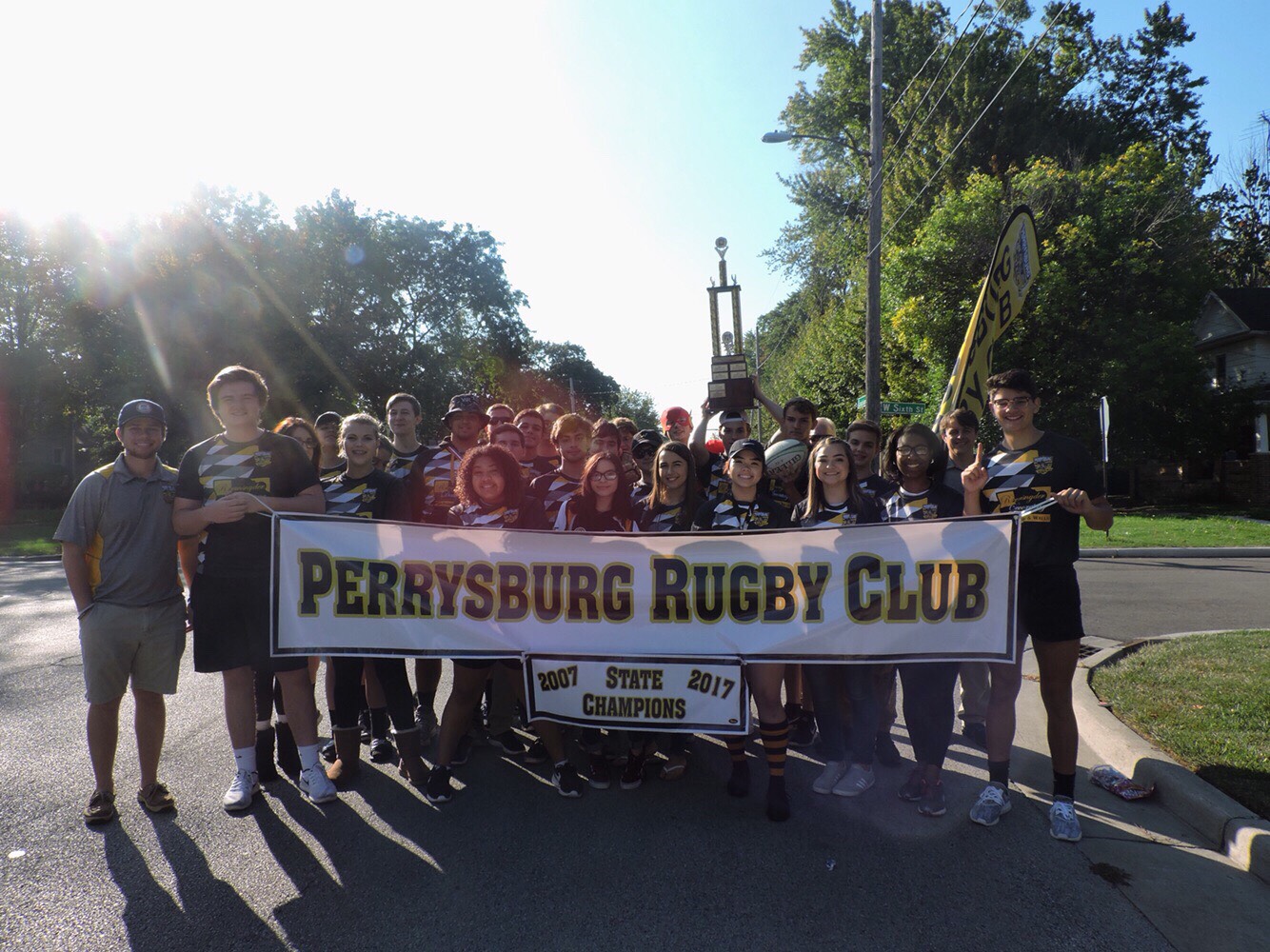 While your typical fall sports, such as football, cross country, and soccer ensue, a new sport emerges: rugby. Often times, people associate rugby with danger, full of injuries and pain. While this sport is not for individuals that fear contact sports, both new and returning players agree that playing rugby is a blast.

For the first time this year, the Perrysburg Rugby Club will have a women’s 7’s team competing in matches. But what exactly is 7’s? According to Marc Goddard, one of the coaches of both the men’s and women’s teams, “7’s is an abbreviation of the much more common game of rugby, which has 15 players. The game is played by seven players on each team, for seven minutes each half… It is a fast moving game for the most fit running rugby players.”

Not only is 7’s unique in this aspect, but being a foreign sport sets it apart from American sports through its traditions and rules. Goddard says that, “Rugby is different from other American sports because all 15 or 7 players are needed to be able to provide a unique skill or physicality. In my limited knowledge professional USA sports are often built around a superstar with a good skill set. Rugby teams with… a single superstar are not successful. Relative to football, rugby is not prescribed play by play from the coaches… We give players a tool box to do the job, we don’t give the instruction manual for it.”

As for the health concerns shared by both parents and students alike, Phil Gutkoski, another coach for the men’s and women’s rugby teams, states that, “the rules of rugby diminish major injuries. For example, tackling must be below the chest level and the tackler must wrap his arms around the player all the way to the ground. Rucking from the sides and blindsided shots are penalized. We get a few twisted ankles and knees, but much less than other sports.”

Playing 7’s actually has more benefits, not only in safety, but also in mental well being. “There are times with much adversity that players must overcome. Decisions have to be made quickly and on the fly.  This translates into being able to handle things on a daily basis in normal life. Because of this close relationship that players have with each other on the pitch, it creates a lot of camaraderie and family-type bonding,” says Gutkoski.

“It’s a really good way to meet new people,” remarks Timberly Ray, a returning player for this season. “It makes you feel good about yourself,” she adds.

Another returning player, Elizabeth Nguyen, says, “this organization actually forced me to be sociable with other people.”

While new players are still slightly unfamiliar with the game, they are eager to learn the sport. Sophomore Avery Cook says that, “I thought that it was a very different sport, but also seemed very fun and interesting.”

Maya Jones, another new player, adds, “None of the other sports seem as interesting. I wanted to do a sport like football where get to hit and tackle people, but that seemed really dangerous. But rugby is like football, but better since there’s more rules you have to follow which then makes everything safer.”

If girls are interested in joining the team, they can contact Phil Gutkoski at 419-973-0648 to get information on this 7’s season.