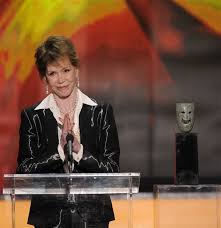 Mary Tyler Moore, an American actress, and dancer, died January 25, 2017, at 80 years of age. Moore was admitted to a hospital after contracting pneumonia. After spending her final hours with friends and family in the hospital room, Moore died after going into cardiac arrest.

For high school readers unfamiliar with Moore’s work, her best performance could arguably be when she played Mary Richards, a successful single woman working as one of the first female television producers. This role became iconic for women all over as it paved the way for the new cultural view of women in the workplace.

Moore has been seen in numerous films and television shows since her film debut in 1961 in X-15. Though her start in show business began with the part of “Happy Hotpoint,” a dancer in commercials promoting home appliances. A few of her more well-known productions include oscar nominated movie Ordinary People, Thoroughly Modern Millie, and The Dick Van Dyke Show. Throughout her career, Moore won 29 Emmy Awards and 3 golden globe awards for her fabulous performances.

Moore was born on December 29 in 1936. Growing up Moore was the eldest of two siblings born from George and Marjorie Moore who both struggled with alcoholism. Moore was not particularly close with her parents. She managed to outlive her younger siblings, her sister dying of drug and alcohol abuse and her brother dying of cancer not long after his suicide attempt. Moore has been married 3 times and was even diagnosed with Type 1 Diabetes in her early 30s. Despite being surrounded by tragedy Mary Tyler Moore managed to keep her head held high while walking through life. When she struggled with Alcoholism herself, she checked into the Betty Ford Clinic for treatment. She rose above her Type 1 Diabetes and is became a spokesperson and international advocate for the Juvenile Diabetes Research Foundation.

Mary Tyler Moore was an animal lover and a vegetarian and was, in part, an activist, working with organizations like the Humane Society and Farm Sanctuary. She was a feminist icon and a beloved actress who worked past all the struggles the world threw at her. At the age of 80 years old in the company of loved ones, Mary Tyler Moore was able to pass away knowing she lived a full, meaningful life.

Other stories by Caitlin Taylor: