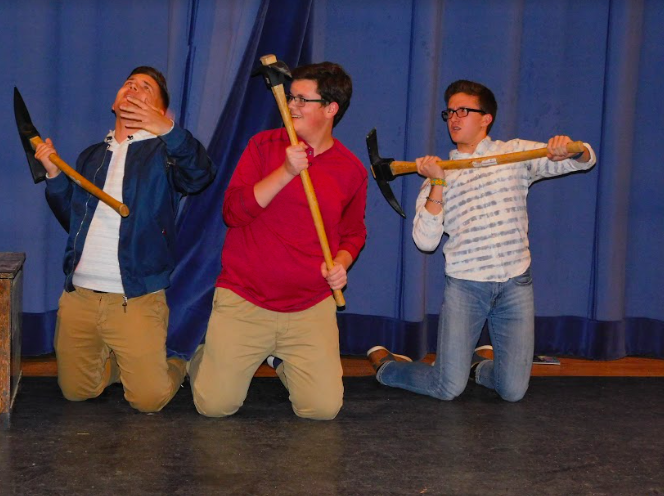 As winter makes it’s way around, the drama department is getting ready for it’s annual Winter One Acts! These acts will usually include two comedies and then an act that is focused around a serious topic to move the audience. In the past, they have covered topics such as school shootings, drinking and driving, and suicide.

This year, the names of each play is Thanks, Hush, and Brothers Grimm Spectaculathon.

Mr. Rob Gentry, director of the Winter One Acts, offered insight on what to expect this year.

“The first one is called Thanks, and it’s about a family that gets together on Thanksgiving.  Hush is about a high school relationship where the guy forces himself on his girlfriend.  The comedy Brother’s Grimm Spectaculathon uses all the Brother’s Grimm stories, like Cinderella, and combine them all together,” said Gentry.

Some were surprised to hear the dramatic show covers a heavy topic such as rape, so I decided to get more info on the thought process behind picking that specific act.

“We have actually done Hush before, I think it has an important message for the student body — not only just the girls, but also the guys — so I think that’s a very timely message.

“And this is one of the nice things about theater, that we can not only entertain people, which we do with the other two acts, but we can also educate people. So that’s our goal with this show, to hopefully educate some students about date rape and about, hopefully what do to do if it happens and how to avoid it,” said Gentry.

The two students who play the two lead roles in Hush offer their view points and opinions on the play. Junior Abbey Perkins and Senior Jack Xiao both are lead roles in Hush, and when asked if they were nervous about portraying these characters, in result of the topic it surrounds, they both gave an immediate answer, “yes.”‘ When asked about what made them the most nervous, Xiao said, “For me it’s just such a controversial topic, and to portray someone who personally I think is like, disgusting, is kind of hard for me. But, it’s such a real topic in our world today that so many people have gone through.”

Henry replied, “the expansion of the acting ability to be able to play a person like that. Personally I wanted Sarah, which is the best friend, however, I guess Gentry saw something in me that he liked for that role.”

Xaio then followed up her answer with ” I have always wanted to be part of a serious act just wanted to take on the challenge. I wanted to see how far my acting skills could go and see if I could do something so different from everything else.”

The Winter One Acts will be super fun to watch and get tons of laughs out of the audience from, but it will also pull at the heartstrings and hopefully teach the student body and everyone else in the audience the importance of safety and that date rape is a very real and dangerous occurrence.

Not only are these acts going to keep you intrigued and laughing for the whole show, but they are also super unique in how they have the audience watch the show. Instead of sitting in the seats in the auditorium, the audience will actually be on the stage with the actors, in seats off to the side of course! Winter One Acts are a great hit every year, and if you have never been, it is highly recommended! The drama department hopes to see as many of you there as possible to share just how hard they worked!