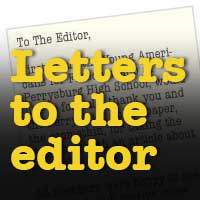 First of all, the Young Americans for Freedom club at Perrysburg High School, would like to formally thank you and the Perrysburg online paper, the eSomethin, for taking the time to publish an article about our club.

All members were happy to see our newer club receive some recognition and we felt the article was well written and for the most part, represented our club correctly.

However, we did find a few small issues with the article that we wanted to address.

First of all, the article stated that President Ronald Reagan was the founder of the national Young Americans for freedom organization. The founder was actually William F. Buckley who started the organization in his home in Connecticut. This information is stated on the Young Americans for Freedom website, which was provided as a resource to the staff of the eSomethin, to help them write this article.

Another issue we noticed in the article was the misquotation of our faculty adviser. He was quoted in the article, but the words used were not exactly what he said.  His response to a question was typed out to the staff of the eSomethin, which, therefore, would have made it very easy to accurately quote him word for word, so as to avoid any possible change of connotation.

Finally, as a club, we felt the article had some comments, or assumptions on topics we cover, that were inaccurate, which might cause a negative slant towards the conservative movement, and hence the club. We hope these issues were completely unintentional, but do understand that when covering a political club, it might be difficult to keep completely neutral as one writes about it.

Once again I would like to convey our gratitude toward the school paper for doing this article and we feel it was a great experience for our club to look over the article and read an outside view of our club. We hope the Young Americans for Freedom club and the school paper can work together again in the future.

Thank you for your time,