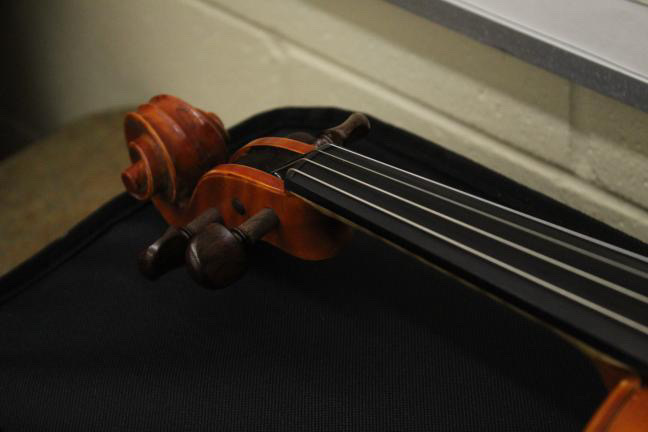 With over 500 PHS students performing, the Crystal Concert at PHS brought families and friends together for holiday music and concluded with a grand finale featuring the piece “Hallelujah Chorus.”

Sophomore cellist Jasper Kowalewski said “It was really fun, but also really stressful. But at least we got to prepare some fun music and hang out with a lot of cool people.”

Kowalewski said students “got to affect a lot of people. Some people were even crying because the music was so beautiful. The fact that we can just move people that much makes me feel really great.”

Michael Smith, the orchestra director, said, “When we first started the Crystal Concert back in the early 2000s, we thought as a music department to make it a more special event by doing it every two years. If we did it every year people would be just used to it and just kind of expect it.”

Smith said that “since it’s such a popular event we actually offer three performances over two nights.”

“The Crystal Concert features all of the bands, all of the choirs, all of the orchestras, and also some small ensembles and small singing groups in between,” he said.  “Over 500 students are involved.”

Smith said “it’s an hour and fifteen minutes of continuous music, and while an orchestra might be playing on the stage, there’ll be a small ensemble ready on the side of the auditorium… When they stop, then the band is on stage ready to perform. We also ask that the audience refrains from any applause until the very end.”

Regarding the price of tickets for the concert, Smith said that “whatever the cost to do the performances was, we pay that with the ticket sales, and whatever is left over is split between the band, orchestra, and choir. So it’s split evenly between the three departments, and then that way we can use that money in each department to reinvest with our students.”

Smith revealed that the music department “actually thought of a couple of different selections to try, and we kept coming back to the ‘Hallelujah Chorus’ because it’s a huge finale of a major work that was written in the 1700s, ‘The Messiah.’ So we always kept the Hallelujah Chorus as a tradition for each Crystal Concert.”

Smith said, “all three performances went extremely well. I thought all the musicians were very prepared, and they performed at a really high level.”

Snahoshchenko explains that, as an exchange student, this was her first and last crystal concert as a violinist for the Concert Orchestra.

“I wish I could do it again but I can’t because it’s once every two years,” said Snahoshchenko.

Snahoshchenko said her host grandmother went to the concert to see her, and that she “doesn’t like to drive so it’s a big deal for her.”

Snahoshchenko said that “overall it was really nice to see the concert from the inside.”

“I thought it went great. It was a neat experience on both nights. But honestly, I probably enjoyed just being in the rooms more. We played poker,” said junior Quinci Bliss in regards to his own experience of the concert, both on and off stage.

Junior band and orchestra member Greyson Rowan said, “I loved it! I thought through all of the work that we put into it, it went really well. While it did cause a little more stress in switching quickly between the two instruments, it ended up being quite manageable.”

While being in both the band and orchestra, Rowan said that “in both the ensembles we were given the option to wear either uniform for the concert, and it was basically up to us to decide. I personally decided to wear the band one, but there were a few who wore the orchestra uniform.”

Sophomores Alexa Shine and Jack Alcroft were two of the many audience members present during the crystal concert.

Shine said that she “absolutely loved every minute of it and I was extremely impressed by everybody who participated in it, especially my friends.”

“There was this older woman who appeared to have what I think was her grandaughter in the girls choir. She was very excited and proud of her and was literally beaming with joy and waving excitedly. She was definitely cheering the loudest at the end of the concert,” she said.

Shine seemed to take up inspiration from the concert enough to want to join the choir.

At the end of the concert, she “could tell that the whole audience was bummed when it ended.”

Alcroft said, “I thought it was truly a cinematic experience to where everyone played to their strengths. I was captivated the entire time.”

“The sense of community was what really encapsulated me in a vision that was truly special. I could tell how healthy and loving the environment was in the department,” he said.

Alcroft’s Crystal Concert experience was partly disturbed, as he mentions that there was an “excessive amount of people on their phones which I didn’t really like.”

“My grandma came and she loved it,” he said.

In terms of his own performance, he seemed to be satisfied and happy to share that he didn’t miss any of his cues.

“If you get the opportunity to, you should definitely see one of these,” he said.