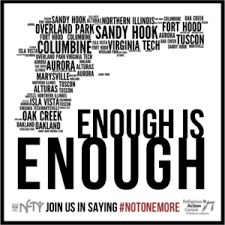 Gun control is one of the most controversial topics depending on personal or political beliefs, but one thing is becoming too prevalent in today’s society: school shootings. Whether you support gun control or not, as human beings we can all agree that we want the gun violence to end.
As we are just two months into the year 2018, on February 14th the U.S. suffered its 18th school shooting at Marjory Stoneman Douglas High in Parkland, Florida, where seventeen people were murdered in cold blood.

As a high school student, each incident breaks my heart. These are children and teachers who come to school for an education. It should be a safe place. My heart goes out to the thousands of families and survivors of this horror and those like it. If something doesn’t change now, it will allow the number of shootings to grow and more innocent lives to be lost. A law could be passed to limit the number of guns per civilian. Our government and President both need to be paying more attention to the problem that guns cause instead of worrying about less pressing issues like Planned Parenthood and what a woman chooses to do with her body or about “fake news”.

A common misconception is that a mentally ill person is more likely to commit an act of violence when in reality the majority of violent crimes are committed by people who do NOT have mental health problems. People with serious mental illnesses are rarely violent. Only 3-5% acts of violence- including gun violence, is caused by someone with a mental illness as stated in American Mental Health Counselors Association. While there is no doubt that people who go into schools and take innocent lives are sick, it seems as though we give these “troubled” murderers an excuse of some sort by labeling them with a mental health illness or a “difficult past” while trying to ignore the issue of how easily they can access a gun.

David Hogg, Emma Gonzalez, Delaney Tarr, and Cameron Kasky, survivors of the shooting in South Florida are just a few of the students who are demanding a change. In a CBS interview with these four students, they are clear that the Marjory Stoneman Douglas High shooting will be the last mass shooting.

“If all our government and President can do is send “thoughts and prayers”, then it’s time for victims to be the change we need to see,” Gonzalez said in Fort Lauderdale. As much as thoughts and prayers might comfort some, they bring no real change to this issue.

“The thing is, as much as I would love to be worrying about prom dresses and college acceptance letters, in my mind, I can’t think about anything now except change. All I can think about is those seventeen faces,” Tarr says during a CBS interview: “…we are going to make ourselves so loud, so brazen, they won’t be able to ignore us in the White House…this is all about gaining a platform so that we can discuss with them creating common sense gun laws and stricter gun legislation…” 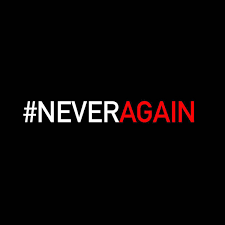 Students in Florida prepare to walk for the March for Our Lives, a message stating that enough is enough. ‘#NeverAgain’ is another formed group started by these students, who demand a change in laws to make sure another shooting never happens.

Another misconception is that the laws we need are also a ‘gun ban’. The change is as simple as if an American citizen wants a handgun, they can receive one after passing multiple background and mental health evaluations. The main goal is to put an end to these tragedies.

Personally, I believe automatic and semi-automatic guns have no place in the hands of civilians. For protection, all you need is a handgun. Reported by CNN, 66% of American gun owners have multiple firearms. Also according to CNN, almost 90 firearms per 100 residents of the United States. The lives of survivors and the lives of victim’s families are changed forever. A shooting could happen anywhere at anytime and it is disgusting that nothing has been done about it. It’s time to make places like schools, churches, concerts, nightclubs, and movie theaters safe again.

A solution could be putting metal detectors at each entryway into these buildings or have someone from the school administration there to decide if a visitor should be in the building or not and unlock the doors.

We might not yet be able to vote, but we can make ourselves heard so that gun violence is no more.