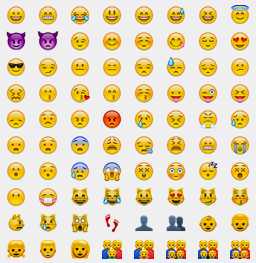 On October 6th, Apple put out a press release displaying their “hundreds of new emoji coming to iPhone and iPad with iOS 11.1.” These include fantasy creatures, new animals, dinosaurs, foods, sports, and clothes. It also includes three gender-neutral faces with varying ages and looks, a woman breastfeeding, and an “I love you” sign in American Sign Language. There are traditional smiley face style emoji, too; there is a face with their finger to their mouth saying “shhh”, a thinking face with a monocle, an angry face with a censored mouth, a mind blown face, and a zany smile. One that many people have been waiting for was also announced to be included, a woman wearing a headscarf.

“The new emoji will debut in next week’s developer and public beta previews of iOS 11.1, and will be available in upcoming software updates for iOS, macOS, and watchOS,” says Apple.

Apple says these emoji were adapted from already approved characters and are extremely detailed.