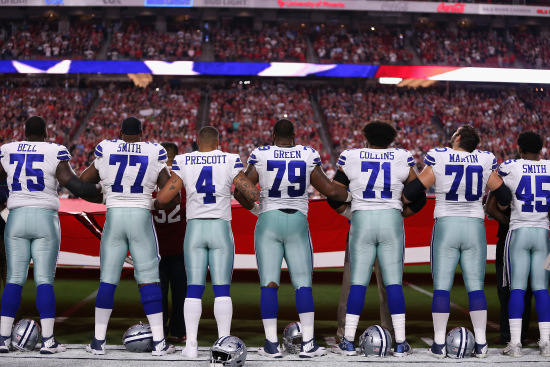 As many of you know, the players in NFL (National Football League) has been protesting police brutality and the social inequality of colored people.  This season the protests happen about every game due to President Donald Trump stating something offensive saying that players who kneel during the national anthem need to be fired. Ever since that statement, about every game players will kneel during the anthem.

Some team’s coaches have said that if players kneel during National Anthem, they will be kicked off the team, so some players kneel as they walk out of the locker room. For example, the Cowboys walked out of their locker room for their game against the Cardinals, locked arms and knelt before the national anthem. They then proceeded to stand with their arms locked for the anthem.

In my opinion, I feel that kneeling during the anthem is offensive. I understand that the players do have a right to express their feelings but I feel like they should kneel prior or after the national anthem, not during our time to represent our country and thank the people who fight for us.

I do understand players wanting to show their protest and opinion on this issue, but not on national television where they are doing their job and could cost their jobs.

The NFL is losing viewers every game because people don’t really want to watch the protest; some do, but others just want to watch our regular weekend football, not political football.

We, as a country, have problems but we also stand together for each other when we fall. This is a time where we need to pick ourselves up and show that even when we are budding heads, we will always stick up for each other.