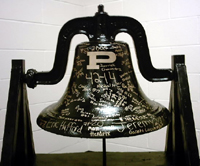 Every teenager, it seems like, hates their home town; it’s too small, it’s too big, it’s too cold, it’s too warm. Perrysburg seems to get more than average dislike by its young residents. Students are mad at the size, whether that be that it’s too small or how much it’s growing — some people are even mad about both. Perrysburg can’t seem to catch a break. Well, I’m here to tell you why Perrysburg is above and beyond the “normal” hometown.

Education: Perrysburg was not only named a Blue Ribbon school in 2014, but also has a much higher graduation rate than the state average. As of last year, we were at 96% opposed to 89% state wide. According to greatschools.org, a website that ranks schools based on state and district averages, Perrysburg scored a nine out of ten. On a statewide scale, we were named the 60th in Ohio.

Our extra-curricular parts of the high school are also nothing to be challenged; eSomethin.com has won an award from Colombia Scholastic Press Association two years in a row and has kept a print paper from 1922 alive for almost 100 years. We have one of the best marching bands in our league and our orchestra placed third in the nation. Perrysburg offers over 30 clubs, around 10 different preforming arts, over 20 sports, and almost won the Golden Megaphone last year for the best student section.

As a town, we’re not half bad either. According to NeighborhoodScout.com, Perrysburg is safer than 48% of cities in the United States. It also states that there are an average of only 13 violent crimes annually.

Perrysburg also has a huge historical side, attracting tourists and fascinating locals. The Underground Railroad went through Toledo, we celebrated our bicentennial last year, and we have the monuments of Fort Meigs remaining from the Battle of 1812.

Do you really want to live somewhere else?