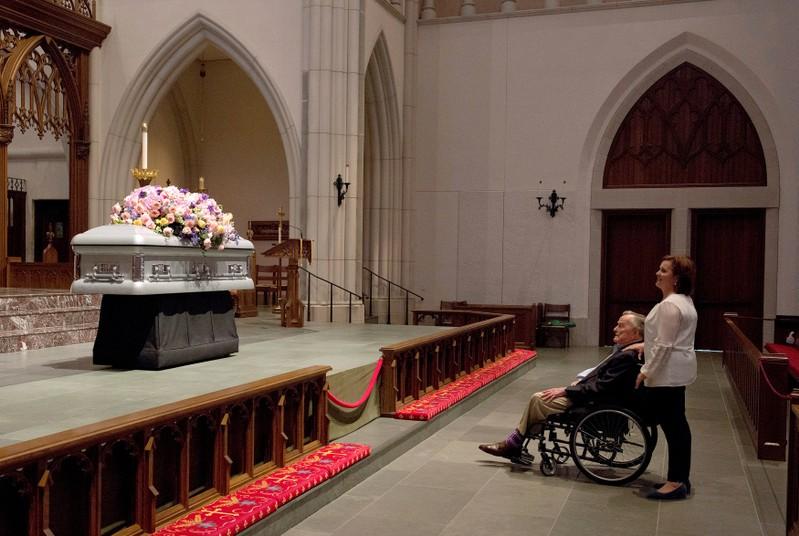 She was known as ‘everybody’s grandmother’.

“The last time I was with her  I asked her about dying. Was she ready to go? Was she sad? Without a beat, she said, ‘Jeb, I believe in Jesus & he is my savior. I don’t want to leave your dad, but I know I will be in a beautiful place” said Jeb Bush as he spoke at her funeral.

“The United States Secret Service code name for Barbara Bush was ‘Tranquility.’ It exemplified her demeanor and its calming, humanizing and gentle effect on those around her. She will be forever missed” wrote CNN’s Jonathan Wackrow. Mrs. Bush was an astonishing woman. Barbara Bush herself is the definition of tranquility.

The day after Mrs. Bush’s passing, a newspaper cartoon by Marshall Ramsey was published. It shows Barbara Bush and Robin Bush, her daughter who passed at the age of three from Leukemia, reuniting in Heaven. Mrs. Bush’s granddaughter, Jenna Bush Hager, posted the cartoon to her Facebook page with the caption, “Someone sent this to me-I don’t know the artist but I love her. Miss you Gans.” Abc7 Chicago noted in an article “The cartoonist said he’s thrilled that his work is being well received online, even helping the family – and the world – mourn.”

As America mourns its loss of former first lady, Barbara Bush, we are reminded of the great memories and stories of her life. May she rest in peace.